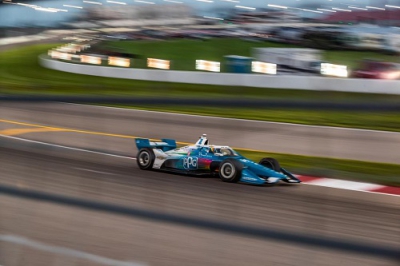 The Bommarito Automotive Group 500 didn’t disappoint Saturday at World-Wide Technology Raceway outside of St. Louis. The event, featuring a red-flag period of two hours and nine minutes, was eventually won by Josef Newgarden.

David Malukas picked up his first career NTT IndyCar Series podium finish in Saturday’s event. Malukas started 12th on the leaderboard and led 12 circuits in the race. He finished 0.4708 seconds behind Newgarden.

The event had an elapsed time of 2 hours, 10 minutes and 40 seconds.

Two cautions slowed the event with the first coming out on lap 145 in turn four involving the 45 of Jack Harvey. The field later went back green on lap 157 with Will Power leading.

The second yellow of the race came out on lap 214 as rain arrived resulting in a red flag period. The field went back green on lap 224 with 36 laps to go.