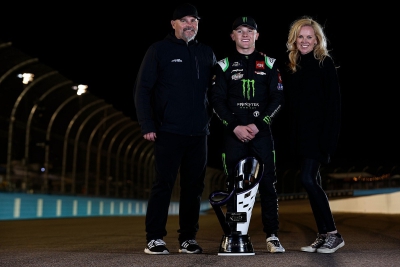 Ty Gibbs, who drove the No. 54 Toyota Camry for his grandfather's team Joe Gibbs Racing in 2022 in the Xfinity, standing with his father Coy (left) and his mother Heather (right) with the Xfinity Series Championship trophy Ty won Saturday evening. Coy suddenly passed away just hours after this photo was taken on Sunday morning at the age of 49. Getty Images

What started out as a bright and hopeful day for the sport of NASCAR turned dark quickly within hours before the final race of the 2022 season began. It was announced by 23XI Racing that Ty Gibbs, who won the NASCAR Xfinity Series Championship nearly 12 hours before, would not be racing due to a family emergency. It was later confirmed that Coy Gibbs, part owner of his fathers NASCAR team Joe Gibbs Racing and father to Ty, had suddenly passed away early Sunday morning in his sleep. Daniel Hemric, who drove for JGR in the Xfinity Series in 2021, filled in for Ty for the NASCAR Championship race Sunday.

Joe Gibbs Racing released a statement Sunday afternoon saying, “It is with great sorrow that Joe Gibbs Racing confirms that Coy Gibbs (co-owner) went to be with the Lord in his sleep last night. The family appreciates all the thoughts and prayers and asks for privacy at this time.” Coy, who actually drove in the Xfinity and Truck Series back in the early 2000’s for his fathers team, was at Phoenix Raceway, where the top three NASCAR national touring series were hosting their championship races. Coy spoke to the media after his son Ty captured the title in the Xfinity Series Saturday evening.

On watching his son go through the tough week of trying to capture the title, Coy stated to the media, “I’m definitely proud of him. I mean, I’ve always got his back as his father. Obviously it’s heartbreaking to go through tough stuff and watch — it’s actually more heartbreaking to watch him go through it. I don’t give a rip; I’m old and don’t care. In fact, I’ve been racing with Chris since we were like 23 or something, so I’ve known him forever. We’ve kind of gone through a bunch of stuff in our life. But to see a kid hurting — and he knows he screwed up; and to go through all that, it’s tough. It’s tough as a parent for sure.”

Joey Logano would end up winning the race and the championship for the NASCAR Cup Series after leading 187 of 312 laps. Logano drove for Joe Gibbs racing from 2009 to 2012, replacing Tony Stewart in the No. 20 Toyota Camry. Now in the No. 22 Ford Mustang for Team Penske, Logano shared his thoughts on the devastating news Sunday.

“I found out before the race, and I still honestly don’t know the details of anything. It’s such an interesting spot as you sit there preparing to run a championship race and then you hear somebody that has been in your life, known for a while — and I still don’t know the details, but it’s just sad. I don’t have words to explain how that is. I feel for Ty more than anything. When you take all the championship racing stuff out, it doesn’t matter at the end of the day. It’s great that we’re up here and we won a championship, but something happens to your family, it doesn’t matter. Like that’s the difference.”

Logano continued on by stating, “For the whole sport, it’s a sad day. For me, it’s a bittersweet type of thing because here we are winning a championship, and here we are one of the people that’s a leader in our sport and someone I’ve known for a while is gone, and I don’t really know how to explain that and how hard that is. Obviously our prayers and thoughts go to the Gibbs family and everyone over at JGR. When you think they’ve had a rough run at it, I couldn’t imagine how Joe feels right now. Yeah, I don’t really know what else to say. It’s hard. I couldn’t imagine. I don’t know what it’s like. But for Ty to lose his dad, that’s just hard.”

Joe Gibbs, a former Head Coach for the Washington Redskins and the owner of Joe Gibbs Racing, has tragically been through the same situation in 2019, when he lost his other son J.D. after battling a degenerative neurological disease. No other information on the death of Coy Gibbs has been released at this time.