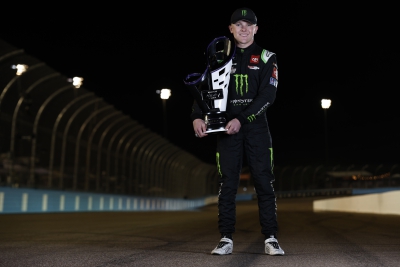 The 2023 NASCAR season begins on February 5th with the running of the Busch Light Clash at the Colosseum at iconic Los Angeles Memorial Colosseum. After last year’s historic season and the debut of the Gen-7 cars, 2023 is shaping up to be an even more competitive and unpredictable season with not just old faces in new places, but also a promising rookie class, NASCAR’s first street race and the uncertainty of who NASCAR’s next media partners will be in just over 2 years’ time.

Needless to say, there's a variety of storylines set to shape the upcoming NASCAR Cup Series season and it all starts with a pair of rookies that dominated the Xfinity Series in 2022.

Ty Gibbs is the defending Xfinity Series champion. He'll make the jump to the Cup Series driving the renumbered 54 car (formerly the 18) vacated by Kyle Busch, who defected to Childress in the offseason. He also comes off the death of his father Coy this past November, which caused him to miss the last race of his fill-in role at 23XI Racing. In his Xfinity championship season last year, he wound up with seven wins and was a consistent threat to win each and every week. It's a safe bet to expect that consistency to continue in his new role in the Cup Series in spite of the level of competition present at NASCAR's highest level.

The 24-year-old Vegas native is coming off a season where he won eight times and was a favorite to win the Xfinity Series title all season long, only missing it by one position in the final race at Phoenix at the hands of his Cup Series rookie rival Ty Gibbs. In 18 prior Cup Series starts over the past 2 seasons, Gragson has a best finish of 5th - that came at the August Daytona race. Last season, he filled in for Alex Bowman in the 48 while he recovered from a concussion. This season, he steps into the 42 for 7-time NASCAR champion Richard Petty. If Gragson can maintain the run of dominance that propelled him through his time in the Xfinity Series, the 42 team could be the surprise of 2023.

Either way, it's shaping up to be a great rookie battle from the green at Daytona to the checkers at Phoenix in November.