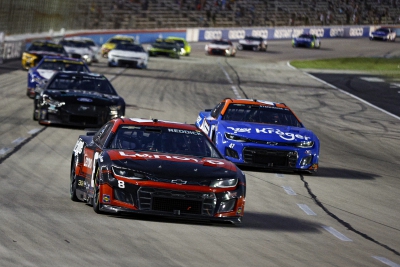 Tyler Reddick (No. 8) leading Ricky Stenhouse Jr (No. 47) and others with a few laps remaining of the 334 laps scheduled. This would be Reddick's third win this season and his career, and his first on an oval. Sean Gardner/Getty Images

No, that isn’t the actual official name for the race, but it could have been after Sunday evening in Fort Worth, Tex. They say everything is bigger in Texas, and that was surely the case with caution flags and tire failures in the Fort Worth area. A record number of 16 yellow flags flew on the one and a half mile speedway, shattering the previous record of 13 back in 2014. Brad Keselowski in his No. 6 Ford Mustang started on pole when the green flag waved at 3:49 p.m. Eastern, but Tyler Reddick in his No. 8 Chevy Camaro around 9:30 p.m. later that evening.

“I feel pretty good about this win,” stated Reddick addressing the media. “It felt like a chaotic night for us from the get go. So many things didn’t go right for us. At least two or three times I thought we were going to be crashing into the outside wall in turn one throughout the race. Our car was strong though and we caught a couple of breaks. I knew we were strong but I didn't know where we would finish. It’s great we were able to be in a great position at the end, to have two fresh tires, and to hold on to the lead.”

Tires were the problems for most teams this afternoon, with 10 of the 16 cautions being caused by the right rear tires going down. After the 56 minute lightning delay that the race had in the middle portion of the event, NASCAR allowed teams to adjust the tire pressures in tires from a recommendation from Goodyear to try to eliminate the tire problems. Unfortunately, several more yellows were brought out due to the blow outs from the Goodyear Eagles, and it is fair to say that these exact same style of tires will be used at the next 1.5 mile track of Las Vegas Motor Speedway, which will be in the round of 8 in the playoffs. Although Vegas doesn’t have the dreadful resin on it’s surface, tires could possibly affect the race.

Senior Vice President for NASCAR Competition Scott Miller talked about the tire failures by saying, “Obviously we saw a lot of tire problems, and we saw a lot of teams that didn’t have tire problems. We’re working through that. Goodyear is working through that with the teams, working through what the setups were, what the air pressures were, to try to get to the bottom of it. There were a lot of teams that reported no problems to us post-race, and they did admit to being a little bit on the conservative side of air pressure and being closer to the suggested minimums that Goodyear recommended.”

Another chaotic moment in the 500 mile tire fall off spectacular, a bit of controversy between Denny Hamlin and William Byron took place in turn four. When the caution came out for Truex Jr, Byron went to show his disapproval on how Hamlin was racing him. The tap Byron put on the No. 11 Toyota Camry sent Hamlin spinning into the infield grass.

Graves talked about the Hamlin/Byron incident by saying, “When we were in the tower, we were paying more attention to the actual cause of the caution up there and dispatching our equipment. The William Byron-Denny Hamlin thing we had no eyes on. We saw Denny go through the grass. By the time we got to a replay that showed the incident well enough to do anything to it, we had gone back to green.” Hamlin was unable to regain his position after the contact, and finished in 10th. Byron stated on pit road that the contact was much harder than he was wanting it to be and he regretted it.

All in all, the race had 36 lead changes with 19 different leaders, an average speed of 114.784 mph, and took four hours, 21 minutes, and 53 seconds to complete. The Cup Series will travel to Talladega Superspeedway to race 500 miles on a 2.667 mile race track of playoff horror. 12 drivers will try to stay in the hunt for the 2022 NASCAR Championship, while trying not to dig themselves into a bigger hole by being in “The Big One.”

Reddicks crew chief Randall Burnett and car owner Richard Childress talked about the mindset of being out of the playoffs and entering two chaotic races of Talladega and the Charlotte Roval, and how they will enter those races. “Win,” quoted Burnett. “That’s what we want to do. We want to try to win as many as we can before the end of the year.” Childress stated a similar comment. “Same here. We just go into Talladega to win. We’ll race just like we normally would there.”