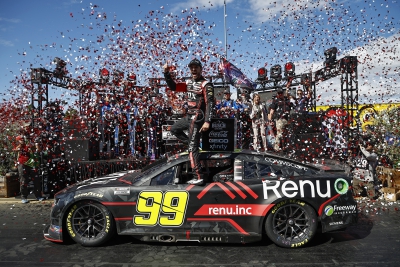 Daniel Suarez celebrating in victory lane as he claims his first victory in the NASCAR Cup Series. Chris Graythen/Getty Images

From starting at Joe Gibbs Racing, then transforming into a Ford driver at Stewart Haas Racing, and even to the Gaunt Brothers team where he had a little to no shot at victory, Daniel Suarez kept faith that he would be a record breaker in the NASCAR scene. He did exactly that in the No. 99 Chevrolet Camaro for TrackHouse Racing at the Sonoma Raceway Sunday afternoon, in route to his first Cup Series win in his sixth full time season.

Suarez battled for his first career win against four fast Fords of Buescher, McDowell, Harvick, and Cindric, some of the best road course ringers in the top division of NASCAR. But not all had such a fun trip to wine country this weekend, even to go as far as to say that they wished they never made the trip to Northern California.

Bubba Wallace had an engine expire on him heading into the chute at Sonoma on just lap 9 of the 110 lap event. Kyle Larson, who had one the previous Toyota SaveMart 350 just one year ago in 2021, had a tire fall off of his Hendrick Motorsports No. 5 Chevrolet after a pit stop in the middle of the race. That means Larson's Crew Chief, Cliff Daniels, will more than likely go on a four week suspension for that failure.

One noticeable change from the last two trips to Sonoma was that NASCAR was utilizing its short course again, the first time since 2018. This was also the second road course of the six schedule in NASCAR's 36 race schedule. The next time we will see the Cup superstars turning left and right will be at the famous Road America on the fourth of July weekend. But for now, NASCAR’s top division will take its only off weekend this next Sunday, and will get ready for a 20 straight weeks of racing starting at Nashville Superspeedway on June 26th. The only NASCAR action next week is the NASCAR CampingWorld Truck Series making its annual trip to Knoxville Raceway for the Clean Harbors 150. That race will start at 9 p.m. Eastern on FS1, MRN, and Sirius XM NASCAR Radio.