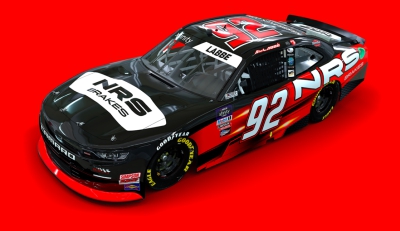 DGM Racing is proud to announce its newest partnership with NRS Brakes, a Canadian brake manufacturer. NRS Brakes will serve as the primary sponsor of Alex Labbé’s No. 92 in the NASCAR Xfinity Series Championship race at Phoenix Raceway this weekend.

“We’re excited to collaborate with DGM Racing on one of the largest stages of the season,” said Montu Khokhar, CEO of NRS Brakes. “It’s a great opportunity for us to work with Alex and his crew in a race environment. This will allow us to continuously push NRS Brakes development at the extreme race performance levels and for the everyday driver.”

The Toronto-based company is a natural fit for DGM Racing as it joins forces with the Canadian racing duo of Mario Gosselin and Alex Labbé.

“I am so excited to add Phoenix Raceway to my 2022 schedule thanks to first-time NASCAR sponsor, NRS Brakes,” said former NASCAR Pinty’s Series Champion and DGM Racing driver, Alex Labbé. “It’s always great to bring new partners from the automobile industry with new ideas to the sport. I am so thankful to participate in the 2022 Championship race, and it’s even more special to me that it is a Canadian company that believes in me and has stepped up to get me there.”

Although Alex Labbé isn’t competing for the Xfinity Series Championship, his eyes are set on the 2022 Drivers’ Standings with the goal of finishing the season in the Top 20. He is currently 19th despite not competing in seven races this year.

“We are so happy to see Alex compete in the upcoming race at Phoenix Raceway. As the final race of the season, it is one of the biggest and most important races of the year,” said DGM Racing team owner, Mario Gosselin. “We’re thrilled to welcome a Canadian company to the team not only because of our Canadian roots, but because many of our fans are Canadian as well.”

Rate this item
(0 votes)
Tweet
« RACE ADVANCE: Kaz Grala at Phoenix Raceway Racing for the Gift of Life in Phoenix »