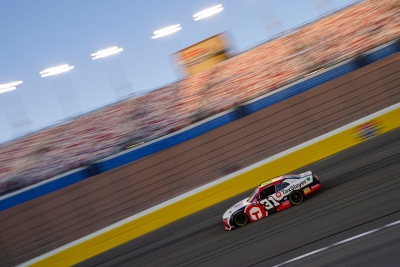 - Practice; After the completion of technical inspection teams would take to the 1.5-mile Las Vegas Motor Speedway (LVMS) for a 20-minute practice session on Friday afternoon. Running 14 laps during his practice session, Myatt Snider would record a fastest lap of 31.425 at 171.838 mph on Lap-4 ranking him 27th fastest of the 38 cars entered for the NASCAR Xfinity Series (NXS) Alsco Uniforms 302 at the Las Vegas Motor Speedway.

– Starting Position; Directly after the 20-minute practice session teams would move into single-lap qualifying to determine the starting order for Saturday’s Alsco Uniforms 302. Rolling off 23rd to make his qualifying effort Snider would come to pit lane to cool his engine as the No. 98 during his qualifying lap ahead of Snider would spin on the racetrack bringing out the caution. Once getting up to speed two competitors later Snider would record a lap of 30.886 at 174.836 placing the No. 31 TaxSlayer Chevrolet Camaro in the 23rd position.

– Las Vegas Motor Stats; Saturday’s NXS Alsco Uniforms 302 will mark Snider’s sixth start at LVMS in NXS competition. In his debut at LVMS in the Spring of 2020, Snider would start in the first position based on the qualifying matrix and would run in the Top-Ten the entire day until getting spun by the No. 9 towards the end of the second stage. Snider would regroup to salvage a 16thplace finish at the conclusion. In the fall of 2020, running for a different team Snider would start in the 32nd spot based on the qualifying matrix and would fight an ill handling car all day and would continue to make change after change. At the end of the 200-laps, Snider would score a Top-20 finish with 19th place.

The Spring of 2021, would see Snider once again start in the first position, but a mid-race stack up entering pit road would cause enough damage the front end of Snider’s car he would have to limp it around the remainder of the race to finish nine laps down in the 32nd spot. The Fall race would see Snider start in the 12th position work his way up to the eighth position in the final stage. Running the high line to gain ground Snider would make slight contact with the wall and would get out of shape finishing in the 15th position at the conclusion of the 200-lap race.

Earlier this year Snider would be required to run the same car the Jordan Anderson Racing (JAR) Bommarito Autosport team fielded the week prior at Auto Club Speedway that was damaged with a late race flat tire. After extensive repairs during the week things were just not quite the same. Starting in the 34th position Snider would salvage a 21st place finish. In five previous starts at LVMS, Snider holds an average finish of 20.6 with a best of 15th coming in the fall of 2021.

Last Fall, JAR Bommarito Autosport would make its debut in the NXS at LVMS fielding the No. 31 for Ty Dillon. Starting in the 28th position, Dillon would quickly make his way thru the field to lead the first ever laps (17) in JAR Bommarito Autosport Xfinity Series history. A late race pit stop error would put Dillon back on the restart and would run out of laps enroute to a eighth place finish.

- TaxSlayer; TaxSlayer is an easy-to-use online tax filing platform with unlimited support at a fraction of the cost of the competition. Trusted for over 50 years, the Augusta-based tech company successfully completed more than 10 million federal and state e-filed tax returns in 2021 and processed $15 billion in refunds. With over 15,000 reviews on consumer review site Trustpilot, 85% of customers rate TaxSlayer Great or Excellent. On top of ensuring 100% accuracy, TaxSlayer has a maximum refund guarantee and is committed to providing the right tools at the right price. For more information, visit TaxSlayer.com.

– Chassis; JAR Bommarito Autosport will bring Chassis No. 106 to the track for Snider to compete with in the Alsco Uniforms 302 at LVMS. This weekend’s race will be the debut race for Chassis No. 106.