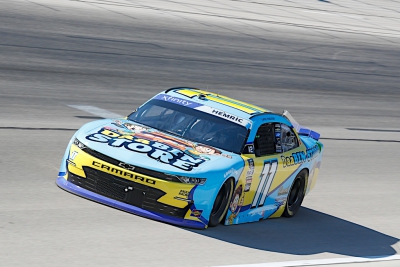 Kaulig Racing is thrilled to announce the return of reigning NASCAR Xfinity Series (NXS) champion, Daniel Hemric for the 2023 season.

Hemric, who signed on for a one-year deal with Kaulig Racing for the 2022 NXS season, has signed an extension for the 2023 season in the team’s No. 11 Chevrolet.

“Kaulig Racing has welcomed me with open arms and I’m excited about the future we’re building together,” said Hemric. “I believe in Matt Kaulig and Chris Rice’s vision for this team, and know we’ve got some unfinished business to take care of next year. 2023 starts today.”

“Daniel Hemric has played such a vital role in growing our Xfinity Series team,” said Chris Rice, president of Kaulig Racing. “He and his teammates, AJ (Allmendinger) and Landon (Cassill), work together so well and lean on each other in a way that no other team does. We are really excited to continuing that success with Daniel as part of this family.”

In addition to his full-time NXS season, Hemric piloted Kaulig Racing’s No. 16 Camaro ZL1 in the NASCAR Cup Series (NCS), which he shared with teammates AJ Allmendinger and Noah Gragson.

“We are so excited to have Daniel back next year in the car that started all of this, our No. 11 Chevrolet,” said team owner, Matt Kaulig. “Over the past year, Daniel has embraced what it is like to be a part of the Kaulig Racing family and has been instrumental in growing our team. We can’t wait for another great season together next year.”

With Kaulig Racing’s 2023 NXS lineup set, Hemric will kick off his second year with the team at Daytona International Speedway in the NXS season-opener on Saturday, February 18. Partnership information for the 2023 season will be announced at a later date.