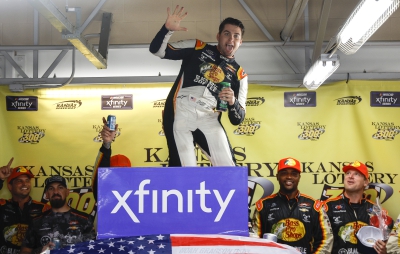 Rain, rain, go away may have been on the minds of every driver on Saturday afternoon in Kansas except for one: Noah Gragson.

Gragson was able to take advantage of two re-starts before the end of Stage 2 – and the skies opening up – to make the race official and earn the 10th checkered flag of his Xfinity Series career, and fifth of the season.

While Ty Gibbs dominated the early going of the race – winning Stage 1 and leading 66 laps – it was Gragson who was able to take advantage of the Lap 76 re-start after Jeremy Clements spun a few laps earlier.

With Austin Hill, Brett Moffitt and Ryan Sieg staying out under yellow in anticipation of the rain to come, Gragson started on the inside of the second row next to Gibbs.

Gibbs, though, took several laps to overtake Hill, while Gragson quickly spurted out to more than a one-second lead following the re-start.

Then on Lap 82, NASCAR displayed the caution flag for rain, running a few caution laps before determining it would allow the drivers to race to the end of Stage 2 on Lap 90.

Gragson was able to keep ahead during the two-lap shootout to win Stage 2, and the rain started pouring soon after, ensuring Gragson a second consecutive victory as NASCAR called the race official as the second stage was completed.

“It was tough. I don’t know if we had the fastest car there at the beginning in the first stage,” Gragson said of the rain-shortened afternoon.

Gragson later added: “I felt like if it would’ve went green, we could’ve kept working on it; we had a pretty fast car there. I’ll take (the wins) any way we can get them.”

Allgaier nosed Gibbs for second as the two made contact coming to the line to finish Stage 2. Pole-sitter Brandon Jones came home fourth, while Cup-regular Ross Chastain drove the No. 48 Chevrolet for Big Machine Racing to a fifth-place finish.

Allmendinger leads the regular-season standings by 38 points over Gibbs with one race remaining before the Xfinity Series Playoffs, with Allgaier 55 points out of first place.

My name is Jason, and I am from Binghamton, N.Y. I am currently pursuing a journalism degree from Buffalo State College, and it is my goal to work in the NASCAR media world. Sports are my passion, and watching/attending sporting events is what I do most in my free time.
https://twitter.com/jasonpguth