NXS: Creed and Larson trade paint handing Noah Gragson the win in the VFW Help a Hero 200 at Darlington Raceway 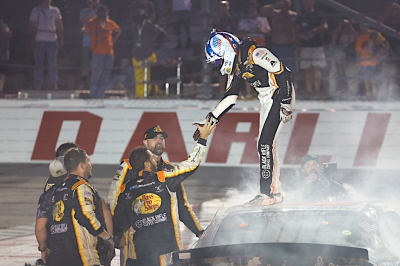 With just three laps completed Noah Gragson who started on the outside pole was able to take the lead away from Brandon Jones leading 42 of the laps of the first stage to take home the first stage win of the day.

However, stage one wouldn’t be without issues for Gragson who smoked the tires going down the front saying the brakes in the car had locked up on him. These issues and lapped traffic would allow Jones to close back in to battle for the lead but wouldn’t be enough.

Bell who had started at the rear of the field due to an engine change was able to work himself up to the eight spot just as Larson would cut a tire sending him to pit road with one lap remaining in the stage.

While under caution and coming back to green Alfredo would slam into the back of Nemechek while trying to catch up to the tail end of the field. This could send Nemechek spinning and cause heavy damage to the front and hood of Alfredo.

Caution out once again fly for the second time of the day with a multi-car wreck would break out off turn two when Snider would get turned to collect both Wright and Herbst causing Herbst to hit the inside wall.

Just as the race would once again go back green rain would close in on the track and slow the race for the third time of the day with less than 10 laps to halfway. NASCAR would bring the cars to pit road with 67 laps completed bringing the race to a stop.

Follow a two-and-a-half-hour delay to dry the track racing would resume once again with 70 laps to go.

Stage two would end when Yeley car would engulf in fire with two laps remaining handing race leader Justin Allgaier the stage who had taken lead away from Gragson with seven laps remaining in the stage.

Allgaier would take the early jump in the final stage of the night leading a lap before getting caught and passed by Sheldon Creed. This would also allow Hill and Gragson to get by as the handling of the car would start going away.

While running in ninth place Brandon Jones would get up by the wall and loose it to loop the car going into turn four that would end up bringing out the fifth caution of the night. This would send everyone to pit road with Creed and Gragson coming off pit road once again in the first two spots.

As the white flag would come out Larson and Creed would trade paint going into turn one and two allowing Gragson to close in and got next to the pair heading into the final turns just as Creed would lose a tire getting into the wall in three and four. Gragson would hit the wall with Larson also behind in third hitting the wall. As the trio got off turn four Creed would continue riding the wall allowing Gragson to get past getting to the line first to take home the win at Darlington Raceway.

Creed would end up second followed by AJ Allmendinger, Allgaier and Larson to round out the top-five.

The NASCAR Xfinity Series continues next week at Kansas Speedway next Saturday, September 10 at 3:00 p.m. on USA Network.