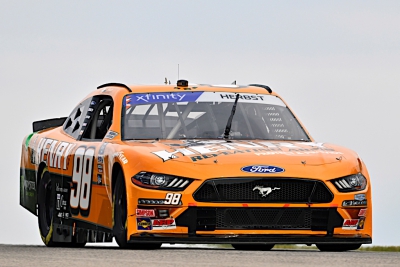 Riley Herbst and his No. 98 Henry Repeating Arms Ford Mustang for Stewart-Haas Racing (SHR) overcame a midrace pit road penalty to finish seventh in Saturday’s Henry 180 at Road America in Elkhart Lake, Wisconsin. Herbst started third for the scheduled 45-lap race after a strong qualifying run Friday. He ran solidly in the top-five for all 10 laps of the first stage to finish fourth and earn seven valuable bonus points. Alternate pit strategy brought Herbst to the pits during the break and he restarted 18th for the second stage, but he made quick work of his race up through the field from there. Herbst was seventh by the end of Stage 2. On the No. 98 team’s second-to-last pit stop of the day, it was handed a penalty for a safety violation and Herbst was forced to restart at the rear of the field on lap 29. Herbst patiently and methodically worked his way up through the field once again and was sitting in the top-10 for NASCAR overtime. He rallied to bring home his 10th top-10 finish of the 2022 season.

“I mean, that wasn’t the day we wanted. We had a great weekend by qualifying third and ran well for most of the race. The racecar was a little loose, but I was able to score stage points and finish seventh. We made mistakes, but we’ll learn from them and get better. On to Atlanta.”

● Herbst earned his 10th top-10 of the season and his second top-10 in three career NASCAR Cup Series starts at Road America.

● Ty Gibbs won the Henry 180 to score his eighth career Xfinity Series victory, his fourth of the season and his first at Road America. His margin over second-place Kyle Larson was .858 of a second.

● There were five caution periods for a total of 12 laps.

● Twenty-two of the 38 drivers in the race finished on the lead lap.

● AJ Allmendinger remains the championship leader after Road America with a nine-point advantage over second-place Gibbs.

The next event on the NASCAR Xfinity Series schedule is the Alsco Uniforms 250 on July 9 at Atlanta Motor Speedway. The race starts at 5 p.m. EDT with live coverage provided by USA and SiriusXM NASCAR Radio.