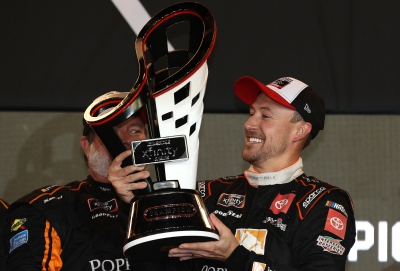 Maintaining the gap to defending champion Austin Cindric over the final two laps of the race, Hemric was able to get to the bumper of the Team Penske driver to move him up the racetrack on the final lap.

After beating and banging coming to the stripe, the driver of the Joe Gibbs Racing Poppy Bank Toyota was able to edge Cindric by a nose after a record-tying 10 runner-up finishes prior to earning his first career victory.

“I blacked out. Just knew I had to be the first one to the line,” Hemric said on the NBCSN telecast. “I thought I let him (Cindric) get too much of a run off of (turn) four, drove into one and maintained, and knew I was close enough.”

“This is what it’s all about,” Hemric continued. “Winning at the second highest level in all of motorsports. What an honor. Unbelievable.”

A gracious Cindric won the first Stage of the race and led a race-high 113 laps, but was unable to bring home his second consecutive championship.

“I’m very appreciative of the opportunity to race on such a big stage … It would have been awesome to finish this out. I felt like we had a dominant race car, I feel like we did everything right. Came up a little bit short.”

Speaking on the contact with Hemric, Cindric added: “Obviously moved out of the way and doored, but that’s hard racing. That’s why everyone enjoys watching this series, and it’s because there’s a lot on the line.”

A.J. Allmendinger, the fourth finisher amongst the Championship Four, had vibration issues for much of the night – spinning out with 20 laps remaining – and was only able to muster a 14th place finish.

The 2022 Xfinity Series season kicks off at Daytona International Speedway on Saturday, Feb. 19 at 5 p.m. ET on FS1.