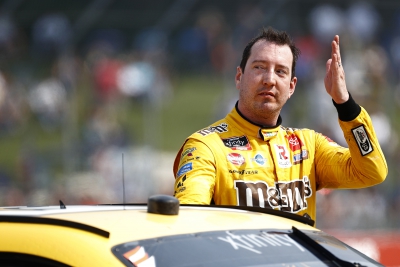 Kyle Busch, driver of the No. 54 M&M's Ice Cream Toyota, led only the final five laps but cruised to a 3.522-second victory over Joe Gibbs Racing teammate Daniel Hemric on Saturday at Road America.

Busch's teammate Ty Gibbs -- running a fifth entry for the JGR stable on Saturday -- stalled in turn six on lap 36 as his transmission wouldn't shift, bringing out a yellow flag. Busch was among those who pitted for his final set of tires under the caution.

"Obviously tires, that was the saving grace for us," Busch said on the NBC telecast after climbing out of his Toyota Supra in the turn five burnout zone. "We had tires left over, the (No.) 16 (of A.J. Allmendinger) didn't. When we came and put those tires on, I wasn't sure we were going to be able to get through that many cars."

It wasn't all-too easy for Busch, however, as Myatt Snider got loose and spun after making contact with Harrison Burton on the lap 38 restart, setting about a chain-reaction crash involving nine cars -- Busch being one of them.

"I don't know what happened on (those) last couple restarts, just a melee on the start going down the straightaway, I couldn't really see what was happening, but ... thanks to M&M's of course, (Crew Chief) Mark McFarland, the ARCA team -- they came and helped me this weekend -- and (Crew Chief) Chris Gayle, all the Xfinity Series shop, all those guys and girls that help prepare all these cars."

Also involved in the lap 38 crash was Austin Cindric, who looked to have the dominant car on the day, and Justin Allgaier; their damage necessitated coming to pit road, effectively ending their days.

Cindric rebounded for an eighth-place finish, while Allgaier finished 12th.

Stages One and Two were won by Allmendinger, who rebounded to finish fourth after his jackman went over the wall too soon on the teams' pit stop at the conclusion of Stage Two, forcing them to the rear of the field.

Rounding out the top-five were Hemric, Michael Annett, Allmendinger and Harrison Burton.

Completing the top-10 were Kevin Harvick (in the No. 99 for B.J. McLeod Motorsports) in sixth, Riley Herbst in seventh, Austin Cindric in eighth, Noah Gragson in ninth and Justin Haley in 10th.

Cindric maintains the lead in the series standings by 89 points over Allmendinger.