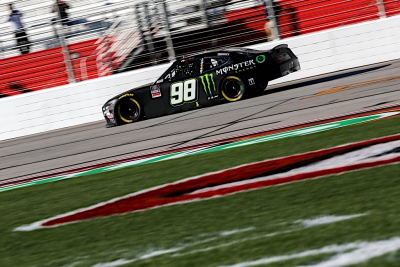 Riley Herbst made it back-to-back top-10 finishes with a sixth-place drive in the EchoPark 250 NASCAR Xfinity Series race Saturday at Atlanta Motor Speedway. The pilot of the No. 98 Monster Energy Ford Mustang finished fourth last week at Phoenix Raceway. And just like last Saturday at Phoenix where his pit crew gained him significant track position on pit road, the Monster Energy team did it again at Atlanta. They placed Herbst fourth for a lap-118 restart, and in the half-lap battle before another caution, Herbst jumped to third. At that point, the Las Vegas-native had to make a choice before the lap-124 restart – go to the top to start on the front row, or go to the bottom where there was more traction. Ultimately, Herbst chose the top and track position, but the lack of grip dropped him a few spots after the green flag waved, sending him to finish sixth.

“I was just struggling a little bit on the short runs there. I feel like if we could’ve maintained on those restarts and not had to get shuffled back and work our way up through the field on the long run, we could’ve been in victory lane because I thought our Monster Energy Ford Mustang was really, really fast. I’m looking forward to coming back to Atlanta in July.”

● Justin Allgaier won the EchoPark 250 to score his 15th career Xfinity Series victory, first of the season and his first at Atlanta. His margin of victory over second-place Martin Truex Jr., was 1.449 seconds.

● There were seven caution periods for a total of 37 laps.

● Twenty-one of the 40 drivers finished on the lead lap.

● Austin Cindric remains the championship leader after Atlanta with a 46-point advantage over second-place Daniel Hemric.

The next event on the Xfinity Series schedule comes Friday, April 9 at Martinsville (Va.) Speedway. The race starts at 8 p.m. EDT with live coverage provided by FS1 and SiriusXM NASCAR Radio.