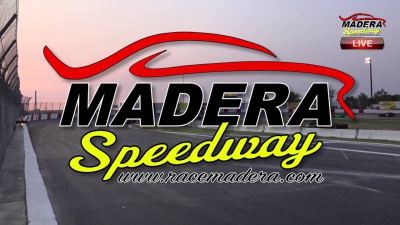 More than three dozen competitors from across the west invade Madera Speedway for the third annual Olga’s California Dream 100 Mini Stock race on August 13, televised for MAVTV. Entries from Arizona, California, Colorado, Idaho, Nevada, Utah, and Washington are entered to take on defending winner Terry Armstrong, Jr. of Hauser Lake, Idaho in the 100-lap grind on the fastest one-third in the west.

Karl Fredrickson, publisher of Speedway Illustrated, will serve as the Grand Marshal.

Saturday’s action will also feature the West Coast Sport Compact 40-lap invasion, Madera Hobby Stocks, Madera Late Models, and Modified Super Toyotas. All tickets will be sold at the track ticket booth the day of the event. Tickets are $20 for Adults, $15 for seniors and military and $10 for ages 6-12. Race fans can “Join” www.YouTube.com/ShortTrackTV for $19.99 per month for a members-only live stream as well.

A field of the best champion drivers of four-cylinder racing will be in action in search of a piece of the $2,000-to-win purse that also features numerous contingency awards. California champions such as Josh Cross from Manteca, Fortuna’s Gary Klinetobe, and Roseville’s Ray Molina are among those entered. Nearly 20 of the 39 pre-entries compete regularly at either All American Speedway or Stockton 99 Speedway. Roughly half of the entries are from outside of California as well.

Idaho will be well-represented with seven entries including 2021 fast-time qualifier Fred Vigil of Melba, Idaho. Vigil, Armstrong, Cross, Justin Carson of Ogden, UT, Drew Crenshaw of Nampa, ID, and John Soares of San Bernadino are all attempting their third starts in the Olga’s California Dream 100.

Jason Aguirre leads the Madera Late Model standings with a 40-lap feature planned. Patrick Geiger and Bill Gorden are tied in the MST division after eight nights of competition. Nick Thompson enjoys a 13-point lead in Madera Mini Stock over Jeff Durant. Haley Bugg has stretched her lead out to 35-points in the Hobby Stock class over former track champions Steve Schermerhorn and Manny Gonzales, Jr. All of these divisions will have points on the line this Saturday night.

Action gets underway on Friday with practice from 5pm until 8pm with pit gates opening at 3pm. On Saturday, pit gates open at noon with practice at 1:30pm. Qualifying hits the track at 3:05pm. Heat races are at 4:10pm followed by the C- & B-Mains plus dashes. Opening ceremonies are at 6pm. All five main events will follow.