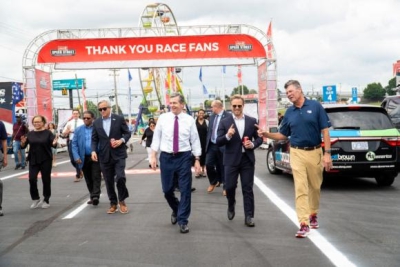 “Motorsports are part of the fabric of who we are as North Carolinians,” Cooper said. “NASCAR started right here. We know, not only is this good to bring people together – friends and family – but it’s also good for our economy. It’s good for great-paying jobs. It’s good for tourism. With Speed Street – I’ve been to it many times – it’s great to bring it here, closer to the action.”

Fans from 50 states and 12 foreign countries will descend upon America’s Home for Racing this weekend, filling hotels and restaurants, visiting race shops and driving the economy. Before the green flag waves on the action-packed weekend, the VIPs got a sneak peek of Circle K Speed Street, including turning a few laps on a Coca-Cola iRacing simulator and writing letters to troops serving overseas. The group also snapped a photo with a life-sized F-16 and enjoyed virtual reality experiences at a special U.S. Air Force display. They were also treated to samples of a variety of tailgating specials courtesy of Pit Boss Grills.

“Creating remarkable events is one of the tenants of what we do here at Charlotte Motor Speedway, and brining Circle K Speed Street into the fold as part of a tremendous Memorial Day Weekend is just one more example of that,” Walter said. “After months of planning, we’re thrilled to finally be able to see everything coming to life as we get ready to officially open the gates on Friday.”

Highlighted by concerts with Grammy-nominated rapper Flo Rida on Friday and classic rock icons Steve Miller Band on Saturday, Circle K Speed Street serves as a prelude to the historic 63rd running of the Coca-Cola 600 on Sunday. The event, with its traditional Memorial Day Weekend place on the NASCAR schedule, also concludes the industry’s NASCAR Salutes campaign, honoring the men and women of the U.S. Armed Services.

“There’s tears of joy, there’s sadness, but when you shake the hand of a fallen military person’s family and tell them ‘thank you’ for how much they mean to you – it’s a wonderful weekend,” Waltrip said. “To see how we continue to build and make the pre-race ceremony bigger and bigger, they do a great job of honoring, and that’s what this weekend is all about – honoring.”

For the latest news, schedules and ticket information visit www.charlottemotorspeedway.com.