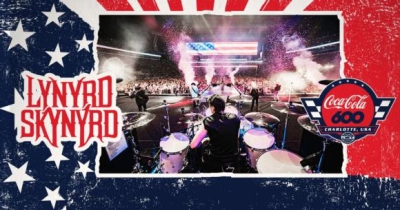 Fans will roar and the red, white and blue will wave before the green flag falls over the Coca-Cola 600 on May 29 at Charlotte Motor Speedway. Iconic rock band Lynyrd Skynyrd will salute America with the ultimate Memorial Day Weekend mix of rock and racing in front of a captivated audience.

The legendary rockers are best known for the RIAA Platinum-certified “Sweet Home Alabama” and self-proclaimed signature song, “Free Bird,” which Rolling Stone said was “easily the most requested live song in existence.” With everlasting hits such as “Simple Man,” “Gimme Three Steps,” “What’s Your Name,” “Call Me The Breeze,” “You Got that Right,” and more, it is easy to see why Rolling Stone named Lynyrd Skynyrd one of its 100 Greatest Bands of All Time.

The 2006 Rock & Roll Hall of Fame inductees will perform a bevy of their Southern rock anthems free for Coca-Cola 600 ticket holders during an hour-long pre-race concert on pit road. Fans who upgrade their race ticket to a Track Access Pass will have stage-front access for the performance.

“We can't wait to get to rocking with all the race fans,” lead singer Johnny Van Zant said. “This is going to be one of the coolest concerts we’ll play all year. It’s not often that you get the chance to perform before something as true-blue American as the Coca-Cola 600. Everybody had better be ready because it’s going to get wild.”

The Lynyrd Skynyrd Coca-Cola 600 pre-race concert will come to life on pit road at approximate 4:00 p.m., mere hours before NASCAR’s best battle in the ultimate test of man and machine, the 63rd running of the Coca-Cola 600. The concert is part of a series of exciting pre-race festivities, which will also feature a the nation’s largest salute to the U.S. Armed Forces and an electric driver introduction.

TICKETS:
Tickets to the Coca-Cola 600 start at just $49 for adults. Kids 12 and under get in for just $10 with a paying adult. For tickets to all of Charlotte Motor Speedway’s events, including the 63rd running of the Coca-Cola 600, visit www.charlottemotorspeedway.com/tickets.