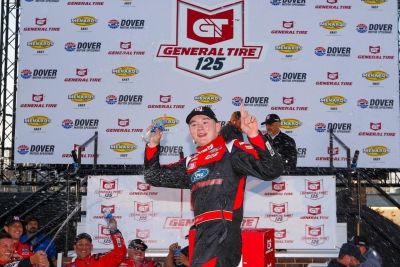 Taylor Gray grabbed the momentum his race team was seeking in a commanding way Friday at Dover Motor Speedway.

And his reward is a new Monster Trophy to display.

Gray led 115 of 125 laps and cruised to his first victory at the Monster Mile with a win in the General Tire 125 ARCA Menards Series East race.

It was the first ARCA Menards Series East victory of the year for Gray, 17, a New Mexico native, who has also made two NASCAR Camping World Truck Series starts this year.

Gray has top-three finishes in all three AMSE races so far this season but Friday marked his first trip to Victory Lane.

“Hard work has paid off finally,” Gray said. “We’ll take this momentum and go to Nashville [next race in series is May 7 at the Fairgrounds] and see what we can do.

Gray, driving the No. 17 Ford for David Gilliland Racing, topped second-place Jesse Love by 1.456 seconds at the checkered flag, with Conner Jones in third and Rajah Caruth in fourth.

Gray earned the pole position with a track record lap of 160.915 mph earlier on Friday.

And after capping a long day at Dover with a big win, Gray already has a place in mind to keep his newly-won Monster Trophy.

“It’s a super cool trophy - probably one of my favorite trophies on the circuit,” Gray said. “It’s probably going to go right in my living room.”

The DuraMAX Drydene 400 presented by RelaDyne is the 104th NASCAR Cup Series race at Dover, one of only 10 venues in the country to host 100 or more Cup Series events.

TICKETS:
Kids 12 and under get in FREE with a paying adult to Saturday’s race and start at just $10 on Sunday. For tickets to all of Dover Motor Speedway’s events, visit https://www.DoverMotorSpeedway.com or call 800-441-RACE.

Keep track of all of Dover Motor Speedway’s events by following on Twitter and Instagram or become a Facebook fan. Be sure to use #DuraMAXDrydene400 and #AGame200 in your posts.