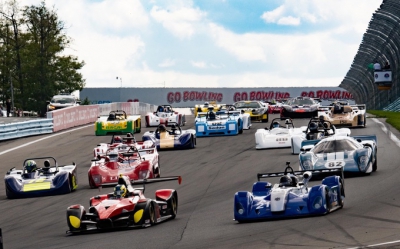 The Watkins Glen SpeedTour, September 9-12, proved to be one of the best shows to date for the 2021 race season. After a one-year hiatus the SpeedTour event attracted nearly 400 cars and featured racing from the Sportscar Vintage Racing Association (SVRA), the Trans Am Series presented by Pirelli and International GT. The weekend also celebrated a special anniversary, as Tony Parella kicks off his 10th year as the owner of SVRA after acquiring the series on the day following the 2012 Hilliard U.S. Vintage Grand Prix at Watkins Glen International (WGI).

Tradition continued as countless cars made the trek from the modern-day WGI circuit to the streets of Watkins Glen, N.Y. The entire village came together on Friday night to celebrate Watkins Glen’s racing heritage, while several cars competing in the U.S. Vintage Grand Prix made laps on the original 6.6-mile road course—the same course where racing returned to the United States following World War II.

The excitement around the weekend continued with the Oscar Koveleski Memorial Race with Groups 8 and 12B on Saturday, the Dick Mooney Memorial Race with Groups 6 and 12A on Sunday, as well as the annual Governor’s Cup featuring racing from 33 Alfa Romeos, and the Collier Cup where 18 MGs took the green flag. In addition, the schedule also featured races named for series’ partners MPI and Lucas Oil.

Throughout the weekend, 21 different racers climbed atop the podium, of which eight were able to sweep their group’s feature races. Peter Uzdavinis ruled Group 1 competition in his 1964 MG Midget, while Joel Quadracci drove his 1967 Brabham BT29 to victory in each of the Group 2 races. In Group 3, it was Kenny Williamson sweeping both features with his red and white 1963 MG B, while Randy Williams did the same in Group 4 driving his green and yellow 1966 Jaguar XKE. Scott Borchetta continued his winning streak in Group 6 driving his 1969 Chevrolet Corvette, while Bernardo Martinez swept the Group 8 competition for the second time this season driving his 1966 Alfa Romeo GTV. In Group 9, Bakir Begovic led the way driving his 1998 Benetton Formula One B198 to victory in both races, while Kermit Upton one-upped the competition winning both Group 12B races in his 1994 BMW M3.

Eighteen MGs took the green flag in Sunday’s Collier Cup, which is a salute to brothers Sam and Miles Collier. Natives of New York, the Collier brothers are credited for introducing the MG brand to the United States. After SCCA started the memorial race in 1954, it has been SVRA who has hosted the tradition of the Collier Cup since 1985. This year’s race featured fierce competition between racers Kenny Williamson and Andrew Moore. While Moore logged the quickest lap of the race, it was Williamson who crossed the finish line first in his 1965 MG MGB.

The Governor’s Cup kicked off Sunday afternoon’s activities with 33 Alfa Romeos going head-to-head on the WGI circuit. Alfa Romeo has a rich history at Watkins Glen with Frank Griswold driving an Alfa Romeo to victory in the first post-war race in 1948. Nick Fonte ran the fastest lap of the race in his 1987 Alfa Romeo 75T Evo IMSA, but it was ultimately Bernardo Martinez who won the race in his 1966 Alfa Romeo GTV. It was the same car Martinez used to sweep both Group 8 races.

For a full list of SVRA’s podium finishers at the Watkins Glen SpeedTour, visit SVRA.com.

SVRA heads to VIRginia International Raceway (VIR) for the VIR SpeedTour in just two weeks, September 23-26. Joined by the Trans Am Series presented by Pirelli, FR Americas, F4 U.S. Championship and International GT, the event will be streamed live to SpeedTour Plus+ Pass subscribers on the SVRA App, which is available for download, here: https://nagrasports.app.link/YHkRxfOxq7.