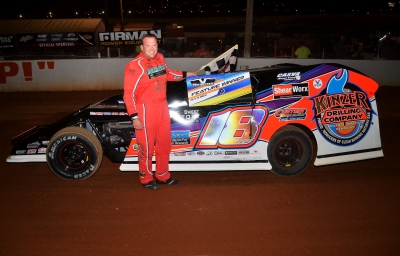 When the calendar reaches late July in summer, you know it’s going to be hot. Everyone present Saturday at Volunteer Speedway could vouch for it being a scorcher, with temperatures around East Tennessee in the low 90s when grandstand and pit gates opened. The racing later proved to be just as heated, with action two- and three-wide around the legendary high banks.

The $1,000-to-win Dyer Trucking 30 “Summer Shootout at The Gap” was the featured event, with the Open Wheel Modified class making its first appearance of the season. Brad Dyer set fast-time at 15.053 seconds in qualifying to pick up $200 pole award, and then took the challenge to start from the rear and try to work his way back into at least a top three finish to earn the S & H Services $500 bonus.

Brandon Kinzer of Lexington, Kentucky, powered into the lead over Wayne James at the start, while behind them Kaleb Trent, David Clark, Jeffery Fox, Adam Ogle and Reece Ogle were battling for position, with Dyer beginning to work his way forward. Kinzer was setting a blistering pace out front, comfortably ahead of the rim-riding James who was up high against the cushion around the turns. Just past the halfway distance, Dyer moved into fifth in the running order behind Trent and Clark, who were running third and fourth.
Kinzer pulled off the flag-to-flag run to victory over Clark, Dyer, Trent and James (who had a flat tire at the end).
Rusty Ballenger jumped out into the lead on opening lap of the Crate Late Model feature over Trevor Sise of Knoxville, but the advantage for Ballenger quickly ended when Sise drove in hard on the bottom racing into the first turn on lap 2, throwing a slide-job to take the point. With Sise out front, Ballenger was being pressured by Adam Ahl, with Gary Crittenden, Josh Henry, Tyler Smith, Ross White, Kaede Loudy, Chris Chandler, Travis Fultz, and Tim Maupin all jockeying for position. … Ahl got around Ballenger for second with six laps remaining, but never closed the gap tight enough to challenge Sise for the lead. Sise picked up his first win of the season, followed by Ahl, Ballenger, Crittenden and Henry.
James Parrott of Rutledge powered into the lead on the start from his outside front-row starting spot over Wayne Rader in the Sportsman Late Model feature. Even though Parrott was showing the way out front, the top five in running order stayed together throughout the full 20-lap distance. But Parrott would not be denied his first win over Adam Mitchell, Wayne Rader, Michael Boyd and Addison Cardwell.
Josh Henry of Newport grabbed the lead at start of the Street Stock feature and led all 20 laps in recording his second win of the season. Finishing behind Henry were Eric Moore, Bo Smith, John Stevens and Bo Gilley.
Bobby Mays paced the field over the first 14 circuits before Shaun Sise of Seymour made pass for the lead racing off the fourth turn. Once out front, Sise never looked back en route to capturing his second Classic win of the season over Mac Lockhart, Bobby Mays, Marcus Mays and Mark Sise.
We always remember firsts in life, and teenager Austin Maples of Morristown will never forget capturing his first-ever Front Wheel Drive victory in just his ninth start. Maples got the win over Brandon Crawford, Eric Partin, Scotty Gosnell and Cody Bean.
Volunteer Speedway PR
Rate this item
(0 votes)
Tweet
« Cruisin’ for a Cause: Motorists Can Drive Their Cars on Phoenix Raceway October 16 QuikTrip, Folds of Honor return to sponsor first Cup race on all-new AMS in 2022 »