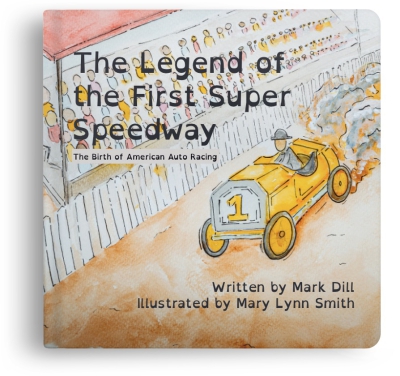 Auto Racing legend Willy T. Ribbs today endorsed Mark Dill's first children's book, "The Legend of the First Super Speedway." Dill based the new book on his original historical novel of the same name. Ribbs wrote the forward to that book, released in 2020. Not only did Ribbs race in the Indianapolis 500, but he also became the first and only African American to test a Formula One racer.

"I said it before, and I will repeat it. Mark is the perfect person to tell this previously untold tale," says Ribbs, who currently serves as Formula One's Ambassador for Diversity and Inclusion. “He brings to the surface the true-life characters that created American auto racing. It's a true, entertaining history written to engage young people. Racing is a terrific sport, and just as my work for Formula One brings new people in, it's essential to engage youngsters."

Dill, born in Indianapolis, has a life-long involvement with auto racing. Among his highlights is bringing Nortel sponsorship to the winning team of the 1997 Indianapolis 500 where he sipped milk in victory lane. Dill served as an Indianapolis Motor Speedway officer and vice president of the Sports Car Vintage Racing Association. As a young man, he raced G Production race cars in the Sports Car Club of America. During college at Indiana University, he was the news director at Indianapolis Raceway Park.

“This children’s edition of ‘The Legend of the First Super Speedway’ is dedicated to my five-year-old grandson, Toby,” says Dill. “Toby attended his first Indy 500 this past May, which happened to be my 50th. Going to the Greatest Spectacle in Racing bonds my family. I sincerely hope my children's book will help build similar traditions for thousands of other families across America.”

Rising illustrator Mary Lynn Smith created the book's colorful illustrations. Smith comes from a family of artists, and this is her first children's book.

“I came into this project with very little knowledge of auto racing and its history, and I learned a great deal about the subject,” Smith says. “Mark and his wife Esther, who did the design layout, were a joy to work with.”

The book will be generally available on November 11. Readers can find it at other major retailers such as Amazon, Walmart, and Target. Check out www.markgdill.com for more information on the book and author. Visitors can purchase an autographed book directly from the Website and browse an online merchandise shop with various unique apparel and other items.