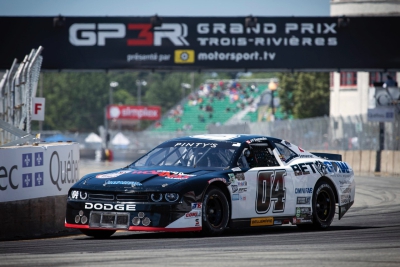 The race weekend started on a promising note, as Jean-François Dumoulin set very quick times, including second fastest in Saturday's practice session. The driver of the #04 Casino Grand Royal Wôlinak | Groupe Bellemare | Trois-Rivières Mitsubishi | Bernier Crépeau Chrysler Fiat | Omnifab car was on track for his first NASCAR Pinty's event of the season and the local racer was aiming for nothing less than victory.

After the practice session, Jean-François Dumoulin declared that; “it's going very well for the Dumoulin Competition team! My brother Louis-Philippe is quickest, and I am second. I was first for a good part of the session, really great car. Before qualifying, the car would understeer from the first lap. Sixth is a good starting position here in Trois-Rivières, but I know I will improve on that quickly. I've always been consistent, so we'll take it one lap at a time. If it rains, it will be an interesting race and if it's dry, we'll have some fun too.”

Jean-François Dumoulin took the start of “The 60 laps of Rousseau Métal presented by Julia Wine” race with only one thing in mind: Victory!

“Louis-Philippe and I had excellent cars,” according to Jean-François Dumoulin. “However, I got a drive-through penalty on a restart, which cost me several positions. When we came back on track, my goal was to preserve the brakes and the car. The #04 Casino Grand Royal Wôlinak | Groupe Bellemare | Trois-Rivières Mitsubishi | Bernier Crépeau Chrysler Fiat | Omnifab car was particularly quick, allowing me to gain ground on every restart. We were having a great race!”

However, Jean-Francois Dumoulin's plans were thwarted with two laps to go when his race ended abruptly against a wall, and with the help of a competitor. “The driver of the #96 car was in my racing line and caught me, which caused me to spin into the wall. It's a shame because I had passed him cleanly just before. His behaviour is disappointing, especially as I was having a perfect race except for the penalty. It was my race, I wanted the win. On top of that, we have two cars to rebuild as I've run into my brother after hitting the wall.”

Jean-François Dumoulin finished the race in 16th position. “It's only a matter of time before we win next year!” he concludes.