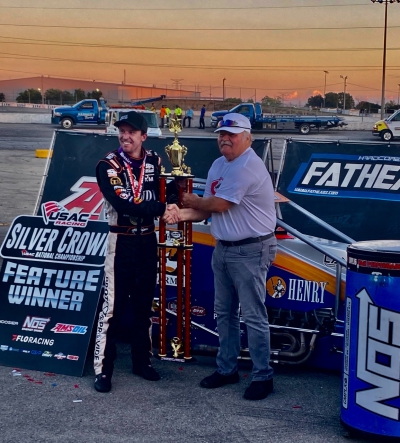 For the second year in a row, Kody Swanson won the pole and led all 100 laps of the Hemelgarn Racing/Super Fitness Rollie Beale Classic USAC Silver Crown race at Toledo Speedway. On Saturday night his Doran-Dyson Racing No. 1 sponsored by Henry Repeating Arms, Glenn Farms and Duncan Oil had a 3.114-second lead over Bobby Santos III when he took the checkered flag.

It was the fourth victory in a row and sixth so far in his career at this one-half mile asphalt oval for Swanson, a native of Kingsburg, Calif., who lives in Indianapolis. Going into this race Swanson was tied with the driver this event is named in memory of, Rollie Beale, so now he is the all-time winner of USAC races at Toledo Speedway. Swanson has now led 655 laps out of the 1,000 laps ever run in this series at this particular track.

Swanson has now won the last three USAC Silver Crown races, with six races remaining in the 2022 season. Swanson leads the point standings with 384 points to Logan Seavey’s 366 and C.J. Leary’s 346 as he seeks an unprecedented seventh series championship. He is already the winningest driver in series history. Saturday night’s victory was number 36.

Swanson also leads the series in the number of pole positions won. He earned his 39th Fatheadz Eyewear pole Saturday night with a time of 15.244 seconds, which was 0.017 better than the time set by the second-fastest qualifier, Leary.

With this pole Swanson became the series’ first driver to have at least six pole positions at two different tracks. In addition to Toledo Speedway he has excelled at Lucas Oil Indianapolis Raceway Park in Brownsburg, Ind.

As the field was forming for the start of the main event, Leary’s car needed assistance to start. That relegated him to the rear of the field for the green flag and put Taylor Ferns in second and Justin Grant in third for the start. As they headed into Turn 1 on the first lap Swanson led with Grant in second, Ferns third, Santos fourth and Seavey fifth, and it stayed that way for the first 41 laps. Swanson had a 1.631-second lead over Grant on lap 40.

Leary had been charging through the field from the rear, and on lap 42 he passed Seavey for fifth place.

At the halfway point Swanson had a 2.104-second lead over Grant, who was followed by Ferns, Santos and Leary. But on lap 56 the event’s only yellow waved, and three of the top-five drivers were involved.

Ferns and Grant made contact, which sent Ferns hard into the wall in Turn 3 and Grant spinning into the infield. She was done for the night, but Grant was able to continue and even got his spot back since he never stopped.

Santos got through the melee but Leary didn’t. He ended up into the Turn 3 wall too, and Travis Welpott joined him there. No one was hurt. Welpott, who was 15th went the accident happened, retired at that point. Leary continued to an 11th-place finish.

The clean-up of the accident took quite a while, with the restart occurring on lap 69 with Swanson in the lead followed by Grant, Santos, Seavey and Russ Gamester.

Swanson was able to rebuild his lead to over 1 second by lap 73. He was 1.5 seconds ahead of Grant on lap 78, and over 2.5 seconds on lap 88 as Grant was busy holding off Santos’s challenges. With 10 laps to go Swanson led by over 3 seconds.

Santos passed Grant for second in Turn 2 on lap 92, but with no other cautions to close the field he remained 3 seconds behind Swanson’s No. 1, which is powered by a Lanci-prepped Ford engine. Swanson won by 3.114 seconds over Santos. Grant finished third followed by Seavey and Gamester.

“Everyone on the Doran Racing team wants to win, and so do I,” said Swanson of Doran Racing, which is based in Lebanon, Ohio. “I’m really fortunate to be with this team.

“I just tried to find a good rhythm, conserve my tires, and stay out of trouble,” he added. “When you have some of the best drivers behind you like I did, it makes you earn it every time.”

The race was streamed live by Flo Racing.

The Doran Racing team is back in action this coming Saturday, Aug. 13, in a 500 Sprint Car Tour race at Berlin Raceway in Marne, Mich. Also on the schedule for August is a USAC Silver Crown race at World Wide Technology Raceway in Madison, Ill., near St. Louis on Aug. 19. All of them will be streamed live on Flo Racing.