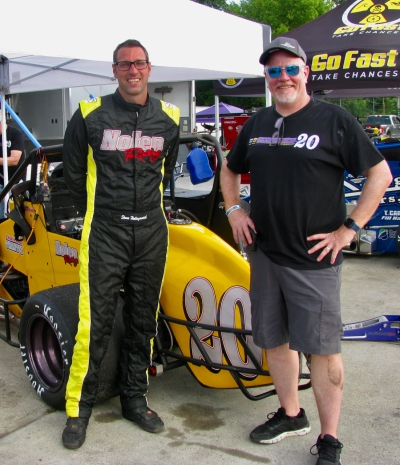 On Saturday night one has to believe that Gene Nolen was looking down at Anderson Speedway and smiling. Shane Hollingsworth of Layfette, Ind., drove the bright yellow Nolen Racing No. 20 Tranter Chevy V6 sponsored by KECO Coatings to a podium finish of third in the inaugural Gene Nolen Classic.

Kody Swanson, a former Nolen Racing driver who won the Little 500 at Anderson Speedway in 2018 and 2019 driving for Nolen Racing, won Saturday’s 100-lap 500 Sprint Car Tour race on the high-banked asphalt quarter-mile oval. The Little 500 is the most prestigious asphalt sprint car race in the world, and in 2019 Swanson and Hollingsworth led an unprecedented 499 of its 500 laps driving Nolen Racing cars enroute to a win and a fourth-place finish.

Hollingsworth competed in many races with Nolen Racing over the years, but in recent years he’s curtailed his schedule to just the Little 500. But Saturday night’s inaugural Gene Nolen Classic was a race he did not want to miss.

The team came well prepared. Hollingsworth qualified second out of the 25 entrants, just 0.017 off the lap of 11.166 seconds that Swanson set as the fastest qualifier. The top four qualifiers were inverted for the start, so Hollingsworth started third in the 22-car field for the race, which was streamed live by MAVTV on Flo Racing.

Swanson passed Hollingsworth for third going into Turn 1 on the first lap, but he was only fourth for eight laps. On lap nine Jacob McElfresh, Swanson and Hollingsworth all got around the polesitter and initial leader, Brian Gerster, which put Hollingsworth back in third place.

On lap 15 both Swanson and Hollingsworth passed the second driver to lead, McElfresh. Hollingsworth ran second to Swanson for the bulk of the race, from lap 15 through lap 93, in a torrid race which only saw two early caution flags. Near the end, on lap 94, Dakoda Armstrong, the series’ point leader, got around Hollingsworth in Turns 1 and 2 to push him back to third, but it was still a stellar performance by the driver and team against the series’ regulars.

“We gave it everything we had,” Hollingsworth said afterwards. “We had a solid qualifying run. We were competitive, but Kody is just in a league of his own. I think Gene would have been pleased with the podium finish, and that we were competitive.

“For the first 25 laps we were able to maintain his pace, but by lap 40 we were dropping off a little and he was still flying,” he added. “Our car was good; we just needed a little more rear grip.”

In addition to battling for position among themselves, the drivers at the front had to carefully lap the drivers further back in the field.

“The traffic was your typical Anderson stuff; nothing too crazy or over the top,” Hollingsworth said.

“We want to thank Anderson Speedway and the 500 Sprint Car Tour for putting on this race, and I think Dad would have been pleased that we were competitive,” said Greg Nolen. “If Shane could not win, it was only fitting that Kody did. Kody and the entire Swanson family are part of the Nolen Racing family. We believe Dad would have had the same thoughts; that if Shane could not win it was great that Kody did.”

No one was hurt in the incidents that brought out the two caution flags during the race, but Doug Van Klompenburg, a member of the Nolen Racing crew from Columbus, Ind., was treated for a heat-related problem in the afternoon. “He was transported to a local hospital, but my understanding is he wasn’t going to stay the night. We’re glad he’s doing great, but we missed having him here for the race,” Nolen said.