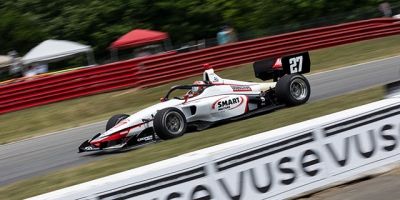 It was a good day to be a rookie in Indy Lights Presented by Cooper Tires as a quartet of drivers new to the series in 2022, led by Hunter McElrea, took the top four spots in Friday’s only practice session at Mid-Ohio Sports Car Course.

McElrea put the No. 27 Andretti Autosport car at the top of the speed chart with a best lap of 1 minute, 13.6126 seconds in preparation for Sunday’s Indy Lights at Mid-Ohio (10:35 a.m. ET, live on Peacock Premium).

“Really good start to the weekend,” said the 22-year-old New Zealand racer. “The car feels great like I was expecting it to be honestly. Andretti Autosport is always strong here, so looking forward to the rest of the weekend. It should be a good one!”

McElrea’s rookie Andretti Autosport teammate Christian Rasmussen, the most recent winner in the series two weeks ago at Road America, followed in second with a best lap time of 1:13.9189 in the No. 28 Road to Indy/Stellrecht car.

The most senior driver in the field, 28-year-old Matthew Brabham, followed his younger competition and rounded out the top five at 1:14.1474 in the No. 83 Andretti Autosport car.

Championship leader Linus Lundqvist found himself in the back half of the field, coming in eighth quickest of the 13 cars in the No. 26 HMD Motorsports with Dale Coyne Racing car with a best lap time of 1:14.2309.

The only incident of the day came late in the session. Abel went off course in Turn 1, making contact with the tire barrier. Abel was seen and released from the infield car center, and his incident ended the practice early.

Indy Lights is back in action from the 13-turn, 2.258-mile permanent road course Saturday, first with practice at 8:35 a.m. (ET), followed by qualifying at 1:45 p.m. Both sessions can be streamed on INDYCAR Live! and listened to on the INDYCAR Radio Network.