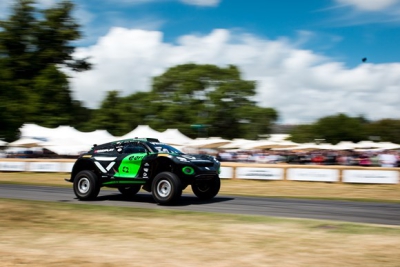 Extreme E returned to Goodwood Festival of Speed last weekend, delivering a spectacular head-to-head shootout for those in attendance.

In a unique event, Veloce Racing and Genesys Andretti United Extreme E battled it out in a head-to-head time-trial, racing against the clock as they took on the infamous Hill Climb.

It was Veloce Racing who came out on top – winning with a combined fastest time across the weekend’s running.

In Saturday’s head-to-head, Veloce Racing led the way with Max Fewtrell, in his first experience behind the wheel of the ODYSSEY 21, pipping Genesys Andretti United Extreme E’s Catie Munnings by just under three seconds. Fewtrell set a time of 1m1.79secs compared to Munnings’ 1min4.87secs.

On Sunday it was Genesys Andretti United Extreme E who were fastest courtesy of Timmy Hansen ahead of Veloce Racing’s Sunday runner Jamie Chadwick.

Hansen set the fastest time of the weekend (59.95secs) with Chadwick just behind (1min0.79secs). Despite this, Veloce Racing still claimed top honours and the overall win at the Festival of Speed.

You can see both Veloce Racing and Genesys Andretti United Extreme E back in action next week at the upcoming Island X Prix double-header in Sardinia (6-7 and 9-10 July).