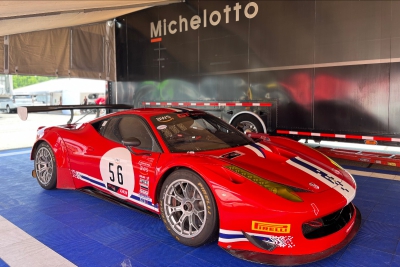 The long-awaited debut of SKI Autosports in the SRO Americas series is finally here.  The team will campaign a Ferrari 458 GT with famed sports car driver Andy Pilgrim in the GT America category.

VIRginia International Raceway will host the series at the historic 3.27 miles, 17-turn course.  The team will take part in the test days on Wednesday and Thursday before the official SRO event schedule begins on Friday, June 17th.

The GT America category is one of the most diverse in the SRO series.  SKI will compete against other Ferraris, in addition to Mercedes AMG, Audi, Corvette and Lamborghini.  With the weather forecast this weekend at VIR being between high 80’s and low 90’s the 40 minute races will be tough on both cars and drivers.

British born – American racing driver, Andy Pilgrim’s career has included stints as a factory Corvette and Cadillac driver.  Pilgrim is a multi-time podium finisher at Le Mans 24 Hour and a Rolex 24 at Daytona winner.  He’s not new to the SRO/World Challenge series and sprint race format.  Pilgrim raced in the Cadillac’s in the Series top category for many seasons, winning the championship in 2005. The Cadillac factory program was one of the most successful in SRO/World Challenge series history.

“We've been waiting and preparing for this week for a long time”, said SKI Autosport team owner Kent Hussey.  “Melissa and I have been involved in motorsports for decades in various roles and series but this is one of our most exciting ventures.  We’re proud to have Andy Pilgrim at the wheel and veteran team manager Phil Creighton behind our efforts.

“As a team, we are very familiar with the Ferrari 458 GT and feel we will be competitive from the start.  We had great success at VIR last year with Andy driving the same Ferrari 458 GT at the International GT event.  We finished first overall in all three races on the weekend.

“The weather forecast is for high heat and humidity which will put all the teams to the test but we’re all up against the same elements, we will be prepared. We’ve put together a great team, with a very talented driver and we’re really looking forward to hitting the track.”