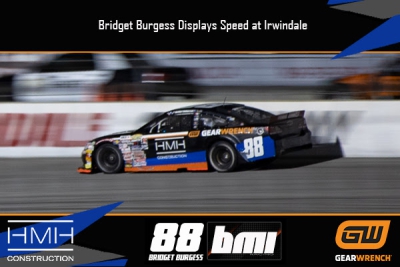 Bridget and the team at BMI Racing spent the time in the race shop preparing the HMH Construction Chevrolet SS for a ten-day trip that includes two road course races. The first stop at Portland International Raceway for round four of NASCAR’s ARCA Menards West Series.

The forecast was grim for the weekend, and the team arrived at the track with overcast conditions. At the start of practice/qualifying, the rain started to fall, and Bridget headed to the race track with wet weather General Tires. Bridget put in some solid laps during the session, utilizing her skills from racing off-road trucks, drifting, and track days in the rain.

As the rain started to fall, the green flag dropped for the Portland 112, and Bridget took the experience she gained from the wet practice, hitting her marks and keeping her laps clean. Bridget quickly moved up to the 5th position as the rain fell. As the view out the front windshield became a greater challenge, Bridget missed the chicane and had to come to a complete stop before continuing, putting her back to 7th position. The Portland 112 race was shortened to 42 laps from the original 57 laps due to visibility issues, with Bridget and her HMH Construction Chevrolet SS having her career-best finish in 7th.

A replay of the Portland 112 from Portland International Raceway will be broadcast on USA Network on June 16 at 2 p.m. ET.

NASCAR’s ARCA Menards West Series will return to action Saturday, June 11, with the running of the General Tire 200 at Sonoma Raceway. The event will be streamed live by FloRacing.