Neo Lambert opens the 2022 Club Challenge season with a win 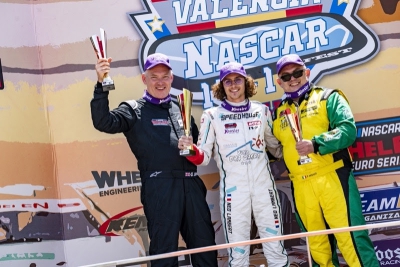 Finally, the 2022  NASCAR Whelen Euro Series season kicked off at Circuit Ricardo Tormo in Valencia, Spain. The Club Challenge drivers were the first to hit the 4.005 km track under the sun of Spain. In the end it was Neo Lambert, who clocked the most consistent 5 laps during the 2 timed 30-minute sessions of the day and therefore claimed victory in the regularity test of EuroNASCAR.

The Speedhouse driver amassed a total penalty time of only 0.268 in the third session compared to his benchmark time and because of this beat Gordon Barnes with whom he shared the same amount of points – 75 markers – at the end of the day. It was his maiden win in the Club Challenge and a perfect start into an exciting season.

“It’s great to be here at Circuit Ricardo Tormo in Valencia in wonderful Spain,” said the first winner of 2022. “It’s a nice and amazing track. I felt very good in the car and I won the Club Challenge right in my first attempt. We were very consistent during the session. It’s amazing to be the winner and now we’re looking forward to Vallelunga, Italy.”

Federico Monti ended up third completing the first podium of the 2022 NWES season with 6 bonus points to his account for selecting the lower benchmark time between the two options provided by the organization. Former Champion Andreas Kuchelbacher and Olivier Panagiotis rounded out the top-5 followed by Josef Machaczek and Julian Vanheelen.

With 75 points in his pockets, Lambert and Barnes share the lead in the championship standings ahead of Round 2, which will take place on July 8th at the fabulous Autodromo di Vallelunga in Italy. The race track near Rome is a guarantee for close racing and a phenomenal festival for race fans and families.

The NASCAR GP Spain continues with EuroNASCAR PRO and EuroNASCAR 2 in action. Follow all qualifying sessions and races live on EuroNASCAR social media pages – YouTube, Facebook, Twitch – and Motorsport.tv as well as on many TV services around the world.