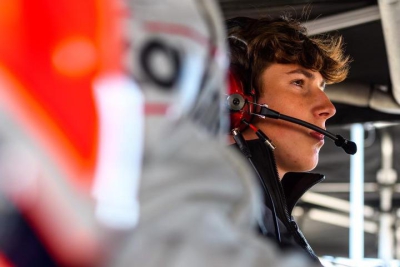 The WeatherTech Raceway Laguna Seca 120 event was another solid effort for Luca Mars as he continues to show front running pace in his Rookie IMSA Michelin Pilot Challenge season.

Despite early challenges in practice where Mars and teammate Nate Stacy struggled to find pace in their Race for RP Mustang, placing outside the top ten on the speed charts, qualifying proved to be a different story.

The KohR Motorsports team utilized their resources and successful past history at the facility to pull all the pieces together overnight. Mars returned the favor by putting in a stellar qualifying effort, leaping all the way to P5 out of 28 GS Class entries, giving the team a bright outlook on the race.

Dean Martin: "We knew we'd have a bit of a challenge at Laguna Seca. Some tracks play in to our strengths while others force us to work a little harder like this weekend. It was a team effort to pull it all together overnight from the engineers to the drivers and when it counted, Luca delivered in qualifying."

Luca had a great start in the race settling in to fifth position and running in step with the next two cars. Along the way the team executed a fuel stop under yellow and then the driver change as well under yellow. In both instances, drivers and team operated flawlessly and Luca was able to bring the car back in the same place he qualified - P5.

Luca Mars: "We struggled with setup early but made some changes and I was able to qualify 5th when it counted. My starts and restarts were solid and the crew nailed our two pitstops letting me bring the car back in fifth still at the end of the run. The time we put in at Mid Ohio last week really showed here in working together on the setup as well as the pit stops - things I really wanted to improve on!"

Despite great early pace in the final stint, over the long run to the end of the race the car fell off some and Nate brought the #60 entry home 12th to close out a tricky yet positive weekend.

The duo will return to action in just two weeks at the historic Mid-Ohio Sports Car Course - a track Luca is familiar with having competed previously there in F2000, IMSA-MX5 Cup and WRL events, scoring several podium finishes over the years. The Mid-Ohio 120 for the IMSA Michelin Pilot Challenge will take place May 13-14 with the 2-hour race scheduled for 4:05PM Saturday May 14th.

Luca Mars: “I am really looking forward to this race! It is as close to home as we run in IMSA so I'm hoping to see a lot of friends and family there. I do have a lot of laps around Mid-Ohio in many different cars too. It will be exciting to get a chance to go there with some momentum after these first two races."

For more information about Luca Mars and his motorsports endeavors please visit www.LucaMars.com