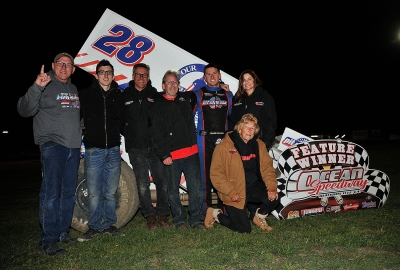 After an electrifying first win at Ocean Speedway on April 8, Chase Johnson of Penngrove had a more straightforward path to victory lane on Friday night as he led the final 23-laps for Friday’s Ocean Sprints presented by Taco Bravo victory. Johnson’s win came aboard Sean Quinn’s No. 28 Our Heroes Dreams entry.

When asked how he’s been so good at Ocean this year, Johnson said “I don’t know. I don’t have an answer for that. We even switched over our tire program this week and I felt we were pretty dang good,” Johnson said. “It’s actually three in a row with one win at Tulare and two here – it’s pretty awesome. A big hats off to Sean Quinn and Tyler Silva. It’s just a great team together and I’m lucky to be a part of it. I’m happy to find my home here with them.”

Concord’s Joey Ancona paced Dirt.Travel time trials then won the dash to score the pole for the 22-car, 30-lap feature. Ancona started alongside Johnson and the duo went side-by-side over the first lap and a half before Ancona had solid possession of the lead on lap two.

Lapped traffic reared its ugly head by just the fifth lap. Ancona went high in traffic through turn one on lap seven with Johnson diving low to slide in front of him for the lead. A caution fell on the following lap for Adam Kaeding stopped in turn four.

Steel Powell of Yuba City spun to a stop on the inside of the backstretch for a caution on lap 13 while Keith Day, Jr. of Salinas stopped for a caution on lap 14. Rickey Sanders seized third from Castro Valley’s Jake Andreotti before the caution for Day but kept the position after a split yellow was determined by scoring.

Sanders and Andreotti continued to race hard for third after the restart. Lapped traffic entered the mix again by lap 20 but Johsnon received a reprieve when the caution fell for Mesa, Arizona’s Brandon Sampson slowing in turn one.

Johnson used the open race track ahead of him to fend off a challenge from Ancona through three and four on the restart. Andreotti and Sanders dueled once more before a caution waved on lap 28 for Gauge Garcia of Lemoore stopped in turn two.

Johnson drove away from Ancona over the final two laps for the win followed by Ancona, Andreotti, Sanders, and eighth-starting J.J. Ringo. Sampson struggled with engine issues throughout the night and was awarded the Beer Optics Hard Luck Award.

“I mean it was all driver there. I gave it up in lapped traffic,” Ancona said. “I should have stayed on the bottom longer and made him go around me. Glad to get rid of the bad luck and come home with a finish.”

Perhaps the show of the night came in the Hobby Stock feature where points leader Joe Gallaher earned the win but it came after 20-laps of excitement versus 2020 IMCA Sport Mod champion Adriane Frost of Watsonville.

Watsonville’s Steve Remde led the race after starting second while Gallaher was on the charge from his tenth starting position. Shane Freeman of Prunedale stopped in turn one for a caution on lap three. Frost took advantage on the restart, using the outside to roar into the lead. Gallaher ran down Remde then took over second on lap nine. Norm Ayers of Corralitos stopped in turn four to require a caution a lap later.

On his father’s birthday and a few days after his own, Jacob Mallet, Jr. won the IMCA Sport Modified main event. The event had a red flag on lap 15, when Mike Kofnovec, Jr. spun in turn three and was hit by Michaela Taylor of Oakley. Taylor was able to emerge from the vehicle after precautionary measures from officials.

Nicole Beardsley of Felton benefitted from some chaos to win the Four Banger feature. Fourth-starting Troy Moore of Santa Cruz seemed poised to win but surrendered the lead to Scotts Valley’s Ryan McClelland on lap 12. Moore then spun into turn one and was unable to continue.

On the restart, McClelland and Kenny Stragalinos of Boulder Creek battled for the lead. Contact and a spin in turn two for McClelland sparked a chain reaction crash, with heavy impacts for TJ Santos of Gilroy and Nick Scentani of Morgan Hill. When action resumed, Beardsley was placed into the lead which she never surrendered. Tony Gullo of Watsonville, Amaya Flowers of Watsonville, Stragalinos, and Jason Lazzerini of Moss Landing rounded out the top-five.