Loris Hezemans rounds out a perfect weekend for Hendriks Motorsport 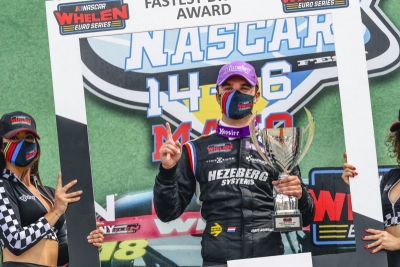 The 2019 NASCAR Whelen Euro Series Champion Loris Hezemans was on fire! The Dutchman won both EuroNASCAR PRO races at the iconic Circuit Ricardo Tormo in Spain and rounded out a perfect weekend for the team of the #7 Hendriks Motorsport Ford Mustang. The 23-year-old led all 18 laps after an intense battle at the start against Alon Day in the #88 CAAL Racing, who made contact with Hezemans and was shuffled down the order.

For the first time in NWES history, the same car was parked in Victory Lane in all four races of a weekend. The #7 Hendriks Motorsport team collected 160 points in the first four races of the new season. It was Hezemans’ ninth EuroNASCAR career win and his third at Circuit Ricardo Tormo. He’s only one win short of tying two-time Champion Anthony Kumpen in fourth place in the all-time winners list. The Dutchman now leads the EuroNASCAR PRO Championship with 80 points.

“We really started where we left last year when we won the last race of the season in Valencia”, said the race winner. “I’m very happy with this result and now just bring on the next race! Of course I’m fighting for my second Champion Ring. Everytime I get in a car I want to win and I think we are really there setup-wise. Let’s see how the season will develop, every track is different, but we are definitely there.”

Alon Day suffered a setback after the contact he made with Hezemans in the first lap. The Israeli did not turn into the pits and ended up 19th under the checkered flag. Gianmarco Ercoli inherited second place at the wheel of the #54 CAAL Racing Chevrolet Camaro. The Italian, who wants to play a role in the 2021 NWES title battle, had a strong run and crossed the finish line 1.839 seconds behind Hezemans. The 26-year-old also topped the Junior Trophy standings.

Sebastiaan Bleekemolen completed the overall podium with an impressive third place in his #69 Ford Mustang. After a difficult 2019 debut season and the break due to the pandemic in 2020, the Dutch team came back stronger than ever to charge to the top of Europe’s official NASCAR series. The 42-year-old also won the race in the Challenger Trophy. 2020 EuroNASCAR 2 Champion Vittorio Ghirelli, driving the #50 Hendriks Motorsport Mustang, ended up fourth.

Jacques Villeneuve finished ninth to score his second top-10 result of the 2021 NWES season ahead of Marc Goossens, who’s wearing the DF1 Racing colors in 2021. Italians Fabrizio Armetta and Dario Caso battled for the second place in the Challenger Trophy which went to Armetta in the #55 The Club Motorsport Chevrolet Camaro.

The 2021 NASCAR Whelen Euro Series will return in June with the NASCAR GP Czech Republic. All EuroNASCAR PRO and EuroNASCAR 2 qualifyings and races will be broadcasted live on EuroNASCAR’s social media channels – YouTube, Facebook, Twitch – and Motorsport.tv.