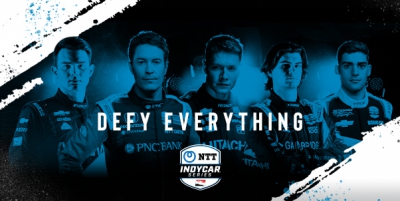 The NTT INDYCAR SERIES unveiled its brand campaign – “Defy Everything” – for the 2021 season that highlights the daring, unapologetic and all-around badass mindset of its elite athletes.

“Defy Everything” was created in partnership with Chicago-based agency Schafer Condon Carter (SCC) and appeals to both diehard race fans, who live to see these athletes put it all on the line every week, and casual sports fans, who will find the sweat and sacrifice from NTT INDYCAR SERIES athletes every time they enter the cockpit captivating.

Highlighting this launch is the release of the anchor video showing the odds-defying, risk-taking, all-or-nothing moments that are commonplace in the NTT INDYCAR SERIES each season. From daring passes by Rinus VeeKay to breathtaking moments involving Colton Herta and near-misses by Graham Rahal, this video encapsulates what makes North America’s premier open-wheel series must-see action. Click here to view.

“This campaign reflects the risks our athletes take at incredible speeds in order to compete at such a high level, offering fans a look at the defiant personality it takes to be an NTT INDYCAR SERIES driver,” said SJ Luedtke, INDYCAR vice president of marketing. “Showcasing their bold athleticism and sheer skill will resonate with sports fans across the globe, but we hope their defiant nature and unapologetic personalities will inspire anyone looking to beat the odds and turn the tables on the status quo.”

Fans can experience this digital-first campaign throughout the season on NTT INDYCAR SERIES and driver/team social media channels through stories of defiance, driver highlight packages, video content features and graphics.

Extensions of the campaign include customized video content, narrated by the drivers themselves, that showcases their audacious personality and thrilling on-track moments. From the insatiable desire to take 5G’s to the neck just for fun to the ambitious mentality it takes to train to react down the millisecond and the fearlessness it takes to push 240 mph just 2 inches from the ground, this content will show how these drivers were born fearing nothing and are willing to “Defy Everything.”

“Defy Everything” video content is told through the lens of “Do Bad Well,” an original song from DJ/producer KSHMR, who has been named one of the Top 100 DJs in the world by DJ Mag each of the last five years and was 12th on the rankings in 2020.