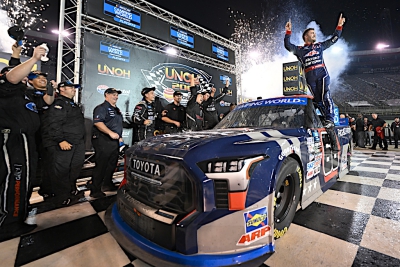 With stage one well underway with Derek Kraus starting on the pole before Chandler Smith while working heavy traffic allow him to take over lead for the first time of the night. Boyd would be the first victim of the night getting into the wall but not drawing a caution. Boyd would drive his car to pit road with a tire down and a fire under the hood before going to the garage and ending his night.

Within laps Reaume well back in the field would lose the truck backing it into the wall off turn two before Caruth would slide in later and smack the side of Reaume truck that has already come to a stop on the bottom of the track. Reaume would be taken by ambulance to a local hospital after visiting the infield care center for further evaluation.

Nemechek who had gone to a backup truck and Zane Smith who also didn’t qualify had been able to work themselves up into 26th and 24th respectively just prior to the caution coming out with Chandler Smith closing in as the lead truck.

When the stage one caution would fall Chandler Smith would cross the line first over Friesen, Kraus, DiBenedetto and Enfinger.

Just as the race was starting to hit a rhythm Mosack would loop his truck off turn two keeping it off the wall to bring out the third caution of the night.

Stage two would come to a close just as stage one did with Chandler Smith taking home the stage win followed by Friesen, Eckes, Rhodes and Taylor Gray.

While closing in on 50 to go Eckes would get into Hacker down the back sending him spinning into turn three to bring out the fifth caution of the night.

With just 20 to go tempers began to flare when Thompson and Tanner Gray got together in turn three after Thompson had blocked Gray multiple times. This time however Tanner would get into the rear of Thompson hooking him and backing the truck into the wall. Thompson would take his truck to the garage to end his night.

As the final green flag went in the air for the night Majeski would clear away with the lead setting sail for the final 12 laps of the night. When it was all over with Ty Majeski would take him the win in Bristol and lock himself into the 2022 Truck Series Championship race in Phoenix.

The Camping World Truck Series returns to Talladega Superspeedway October 1st for the second round of eight.