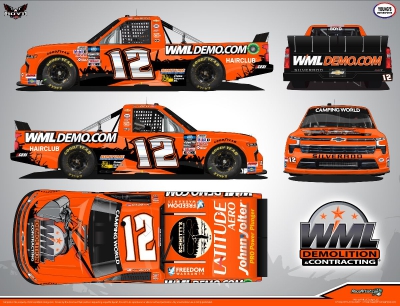 Spencer Boyd’s ability to attract and retain sponsors in the sport of NASCAR has shown itself again with WML Demolition & Contracting returning for a second season as a primary sponsor.  The blaze orange paint scheme highlighted with a chrome number 12 will make its debut as the NASCAR Camping World Truck Series heads to Richmond Raceway on August 13, 2022.

“The new paint on this year’s WML truck is sick!” exclaimed Spencer Boyd. “They wanted something that would stand out, scream demolition, and I think we have delivered.  Richmond is my favorite track and promoting Veteran owned businesses is something I’m passionate about, so we have a great combination for this race and partnership.”

WML is named for the founder’s grandfather, a police officer, a volunteer firefighter, businessman and father of four. Corey Lockhart, Founder of WML, commented on the relationship with Spencer, “He’s one of us.  He busts his ass day in and day out just like us.  When I call him, he picks up the phone.  That is the kind of person we want representing our brand.”

WML Demolition & Contracting was the primary sponsor of Boyd’s No. 20 Silverado in last season’s Richmond race.

Lockhart elaborated on his company’s involvement in NASCAR, “We love the access!  I get to entertain people at the track and get so close to the action.  In my business, relationships are key and this is a great way to show appreciation to people that have helped WML along the way.”

To commemorate the sponsorship, limited-edition WML t-shirts are available on www.spencerboyd.net for purchase prior to the race.