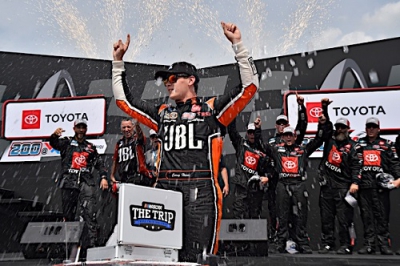 Corey Heim captured his second career victory in Saturday’s event at Gateway Motorsports Park, piloting the No. 51 entry for Kyle Busch Motorsports. The driver from Georgia led the field for 20 of the 165 circuits in the overtime event.

Christian Eckes sat second when the caution on the final lap was displayed. Eckes started fifth on the leaderboard in the 98 Toyota and led the event for nine circuits. He’ll leave the 11th race of the season with six top-five and seven top 10 finishes.

Making his sixth start of 2022, Heim, who started from the pole, will leave with two top-five, three top 10s, and two victories.

Chandler Smith rounded out the top three finishers in the Toyota 200. Smith rolled off fourth and led the field 40 laps.

Rounding out the top five were Stewart Friesen and Johnny Sauter.

Nine of the 11 total cautions in the event were for on-track reasons.

Most notable of them involved John Hunter Nemechek, Stewart Friesen, Ty Majeski, Jesse Little, and Blaine Perkins in turn four. The incident on lap 55 ended the day for Nemechek.

On lap 109 issues plagued both Carson Hocevar and Matt Crafton in turn two. Both drivers were able to continue with their days.

The incident that displayed the checkered flag early on the final lap involved four trucks of Derek Kraus, Carson Hocevar, Tyler Hill, and Austin Wayne Self in turn two. Hocevar was transported to a local hospital for further evaluation. There were no further updates on his condition.

The trucks will go road course racing on June 11th at Sonoma Raceway. Coverage of the race will begin at 7:30p ET. on FS1 and MRN Radio.