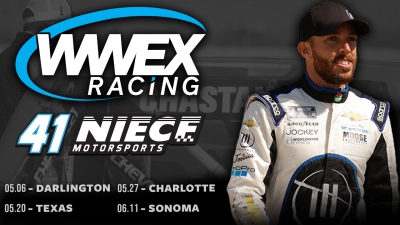 Chastain on making his third NASCAR Camping World Truck Series start of the 2022 season at Texas Motor Speedway: “I’m looking forward to getting back behind the wheel of the No. 41 Worldwide Express Chevrolet this week at Texas. We had a lot of speed at Darlington despite the end result, but I know we’ll make Worldwide Express proud in its home race Friday night.”

Worldwide Express, along with its sister brands of GlobalTranz and Unishippers, currently serve as the full-season, primary partners of Niece Motorsports’ No. 40 Chevrolet Silverado driven by Sunoco Rookie of the Year contender Dean Thompson.

Worldwide Express and Trackhouse Racing recently announced a multi-year partnership that spans 21 NASCAR Cup Series races during the 2022 and 2023 seasons for Chastain’s No. 1 Chevrolet and Daniel Suárez’s No. 99 Chevrolet.

On the Truck: Chastain will pilot the No. 41 Worldwide Express Chevrolet Silverado Friday night at Texas Motor Speedway. The paint scheme features a decal honoring the 30th Anniversary of Worldwide Express on the bed top.