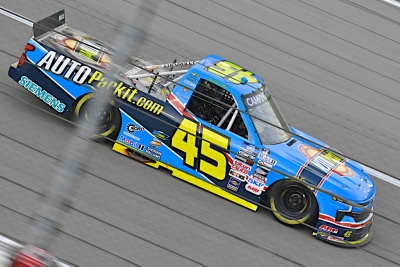 Alan made an early charge through the field in the opening laps of Saturday night’s Heart of America 200, gaining four spots in the first ten laps to get himself on the doorstep of the top-20. After settling for a 22nd-place finish in Stage One and receiving the free pass to get back on the lead lap, Alan put together a solid run to finish 21st in Stage Two.

On lap 103, Alan entered the top-20 and made his way up to 15th with 20 laps to go before a caution on lap 121 brought the field back together for one final restart. Alan fought through traffic in the closing laps to come away with a 19th-place finish and was highest finishing rookie in the field.

Alan on his top-20 effort at Kansas: “Our No. 45 AUTOParkit Chevrolet Silverado had a good run tonight in Kansas. We made the right adjustments all night and I learned a lot as the race went on, we just got unlucky with the timing of the late-race cautions. I felt that we finished a bit lower than the speed that we showed, but we’re looking forward to bringing this same truck to Texas next week.”