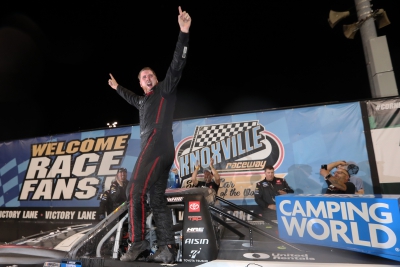 Austin Hill captured the checkered flag on Friday night at the inaugural race at Knoxville Raceway. The win is his first of the season and seventh career victory in the Truck series.

Hill, driver of the No. 16 Hattori Racing Toyota, gained the lead on the third overtime restart before a caution flag flew, granting him the lead for the fourth and final attempt.

Restarting on the bottom, Hill was able to clear Chandler Smith -- who led a race-high 71 laps -- crossing the stripe 1.207 seconds ahead of the Kyle Busch Motorsports driver.

"Kind of thought we were out of it there for a little bit, had that restart on the outside of (Todd Gilliland) earlier in the race, and I fell all the way back to 20th," Hill said on the FS1 telecast in Victory Lane.

"I didn't think we were going to make it back up -- track position was huge, it was really hard to get around people ... everybody at HRE, they never quit, and that's the thing I love about this group."

Smith, who had control of the race for much of Stage Three after staying out at the conclusion of Stage Two, was disappointed with not maintaining the lead on the second-to-last overtime restart.

"Overall I've just got to thank (Crew Chief) Danny (Stockman) and everybody on this No. 18 JBL Toyota Tundra team ... we needed some track position, led all those laps, and I don't think the call was right to be honest with you that they (NASCAR) made, but it is what it is."

The other dominant truck on the night was that of Front Row Motorsports driver Todd Gilliland, who led 61 laps and finished fourth for his sixth top-ten in a row.

Pole-sitter Derek Kraus -- by virtue of the heat races prior to the "main event" -- won both stages and rebounded to finish fifth after a spin on Lap 106.

Joining him on the front row at the start of the race was GMS Racing's Tyler Ankrum, who fell-back to a 17th-place finish.

Jessica Friesen made her Truck series debut -- after getting rained-out of her first opportunity at the Bristol dirt race in March -- but was caught-up in multiple wrecks and finished 26th -- one spot ahead of husband Stewart Friesen.

Points leader John Hunter Nemechek rallied to finish 11th after starting the race from 37th place as the No. 4 Kyle Busch Motorsports team had to go to a backup car after a crash in practice Thursday.

The race featured 14 cautions for 80 yellow-flag laps, and ran 29 laps over the scheduled 150-lap distance.

Only one race remains in the Truck series regular season, with drivers Kraus (-40 points), Ankrum (-44) and Johnny Sauter (-51) on the outside looking in. Carson Hocevar (+61 points), Stewart Friesen (+53) and Smith (+40) are the last three drivers in the Playoffs.

Those drivers will have nearly a full month to ponder their respective fates, as the NASCAR Camping World Truck Series regular season finale won't take place until Saturday, Aug. 7, with the United Rentals 176 at Watkins Glen International. Coverage begins at 12:30 p.m. ET on FS1.