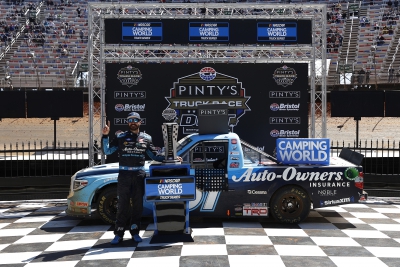 “Yeah it's unbelievable, I guess they had to put dirt on Bristol to put me in victory lane here,” Truex Jr. said to FOX Sports post-race.

“I learned a lot. It was really amazing how much the track changed. I think if you have a good car you can be up front all day long. I’m looking forward to this afternoon.”

On Saturday, the trucks lined up to run heat races. After two laps in the first heat, NASCAR deemed the track not ready and as crews went back out to prepare the track, the rain began to fall. Since the heat races were rained out, starting positions were determined by the NASCAR formula.

John Hunter Nemechek started on the pole with Austin Hill starting alongside him in second.

When the green flag waved, Austin Hill made his way to the point until Sheldon Creed made an aggressive three-wide move on lap two to pass both Hill and Matt Crafton in second.

After contact with the turn two wall on lap three, Tanner Gray spun around on lap 12 bringing out the first caution of the day. Carson Hocevar was the reason for the second yellow when his No. 42 Silverado was stopped on the frontstretch. On lap 34, Chandler Smith got bumped by Austin Wayne Self, this ultimately spun Smith around and he made head on contact with Tyler Ankrum; Ankrum’s day was done after this incident. The stage went green with one lap remaining and Martin Truex Jr. used the outside lane to get around Creed for the stage one victory.

Stewart Friesen and Nemechek stayed out under the stage break, but Truex Jr. on fresh tires made his way around both of them to take the lead back on lap 43. Five laps later, Nemechek spun in turn two and collected both Derek Kraus and Timothy Peters; Kraus and Nemechek went to the garage. Jennifer Jo Cobb went around on lap 62, this brought out the sixth caution. Within two laps of going green, a tire problem for Norm Benning brought out the seventh yellow.

Lap 79 brought trouble to Myatt Snider when he wrecked in turn four and collected Daniel Suarez; both had minimal damage. They went green with six to go in the stage and Truex Jr. was able to gap the field once again, winning stage two.

With 51 laps to go, Kyle Larson slammed into the back of the lapped machine of Mike Marlar; Brett Moffitt and Danny Bohn are among those who were also involved. The rough days for Chandler Smith and Johnny Sauter continued on lap 118 as they collided and both hit the inside wall off of turn two. As Truex Jr. began to pull away from second place, Ben Rhodes, the caution flag flew once more. This time, the caution was for Andrew Gordon when he lost control of his truck in turn four.

A twelve lap green-flag run was all Martin Truex Jr. needed to gap the field once again and pick up his first career NASCAR Camping World Truck Series victory.