Chase Pistone Living a Dream for the Second Time

He’s the grandson of a legend. He’s determined like everyone else. However, this man believed he had hung up his helmet for the final time. Now, this man is back in NASCAR thanks to a second chance that he never believed he had coming.

Chase Pistone, 30, might be older than the other Rookie of the Year competitors in the NASCAR Camping World Truck Series, but that hasn’t slowed him down. Entering 2014, Pistone had not raced competitively in a racecar since November 2007 in what was previously known as the Hooters Pro Cup Series (now the X-1R Pro Cup Series). Then, in late February, the life which he has known for nearly a decade took quite the detour.

“It is kind of odd. I got this call about two weeks before our first race. Dwayne Gaulding, who crew chiefed and took Gray (Gaulding) racing in the legend car stuff, I have had a relationship with for quite some time. I found out he was over there and he put a deal together for me quick. We had two weeks, and we tested I think a week before Martinsville. I didn’t know until late February that it would be possible. It was a rush deal, but I think we have made the most of it for sure,” Pistone said via a telephone interview. 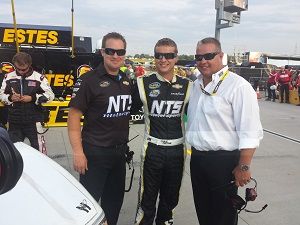 In March, NTS Motorsports announced that Pistone will be racing 14 of the 22 events in the Camping World Truck Series. Prior to entering a Chevrolet Silverado for NTS, Pistone had just one Truck Series start under his belt, and that one track was Martinsville – his first scheduled event of the season. Moreover, his journey to get this ride was rather unorthodox.

During his time away from NASCAR competition, Pistone gave up his dream. Instead, he was helping others accomplish their dreams. He opened up Chase Pistone Incorporated – a company designated to help people race in Legends Cars, Super Late Models and other developmental divisions.  With Pistone’s help, Gaulding , 16, began to get noticed by then NASCAR team owner, Kevin Harvick. As he now attempts to chase his dream for the second time, Pistone has taken the back seat to the business which he built from the ground-up.

“It is hard. I have my brother over here – trying to help me with the legend car stuff. I have a good group of guys that goes (to the races) with my customers on the weekends. All of my customers understand that my business has kind of taken a backseat,” he said about dealing with his business and racing. “So far, we are still having a lot of success with the late model races and the legends. If I can make it work and hire the right people, I am definitely not going to let it interfere with the driving side. My sponsors have done a lot for me, and I am grateful for that. “

So far, the transition back into a racecar has gone well for the North Carolina native. In his first two starts in the Truck Series, Pistone finished 13th and ninth, respectively. At Gateway, he was quickest in one of the practice sessions, and his ninth-place finish was good enough to be given the Sunoco Rookie of the Race crown.

Preceding the race at Gateway, Pistone also had the opportunity to jump back into a Nationwide Series car for the first time since his lone start in the division during 2006 – a year in which he also earned his lone ARCA Series top-10 finish. Turner Scott Motorsports had an opening when Kyle Larson could not run the race at Iowa Speedway due to a conflict with his Sprint Cup Series schedule. Dylan Kwasniewski, the regular driver of the No. 31 Chevrolet, moved over to the No. 42 – handing Pistone one of the best opportunities he has ever had in a racecar.

“I think it was a good opportunity to run Iowa because the No. 31 became available because the driver that drives the No. 42 (Kyle Larson) is at a non-companion weekend. There are no Cup Series drivers. It’s good for me because it gives me a chance at winning and running well, but I don’t mind when the Cup Series drivers are in there because it gives you an opportunity to learn for sure,” he said.

“The trucks were off for so long that I wanted to be in something. I had spoken with them about racing trucks earlier in the year. I was pleased with that organization and likewise, I think they were with me also. Anytime I can get in the seat after being out of the seat for so long, it helps me.”

After running inside of the top-15 for the majority of the 250 lap spectacle at Iowa, Pistone might have some additional opportunities with Turner Scott Motorsports as well. Larson will be out of the No. 42 Chevrolet five times this season – leaving Kwasniewski behind the wheel. Pistone said that he believes he is going to be racing for the team once again at Iowa (August) and Kentucky (September).

However, he has also begun to figure out his plans for next season. After being on a seven year hiatus from NASCAR racing, Pistone had two kids, and now he is able to share his passion with them. Unfortunately, achieving his dream has also made him spend less time with his children – something he hopes to change if he can get a full-time deal in 2015.

“Hopefully, once I figure out what I am going to do next year, I can start bringing them to the track with me. While I’m splitting time in my life between racing and my business, that side of my life has kind of been neglected. It is good and bad. It is good for me because I have a lot of pride in it and they get to watch it on TV and stuff like that. But again – it just takes me out of their life a little bit,” he said. 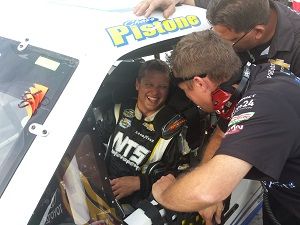 Until he got the official word from Gaulding, Vice President of Operations for NTS Motorsports, Pistone was content with the lifestyle he had created. Now, he has a second chance at becoming what he had always dreamed of.

“I haven’t raced anything competitively since 2007. I had already done that in my mind. It was a tough decision when I got this opportunity. I had to make sure everything made sense that I could make a living doing this. I don’t know if I deserved to, but he had to make it that way so I could focus on the racing side of things because it takes me away from the business.”

As he continues to adjust to the competition and long races, Pistone understands he needs to improve his physical fitness. Entering this second opportunity, he was worried that he didn’t have enough stamina to contend well late in races. However, with perseverance, he has been able to prove himself wrong.

“It has been a lot easier than I thought it was going to be. I wasn’t planning on racing again. I wasn’t in bad shape by any means, but that was the biggest thing. We haven’t raced when it is 100 degrees either, but every race has been a learning experience for sure. On the physical side – that was the one thing I was worried about, but everything has been fine so far,” he said about his physical condition.

Moving forward, Pistone wants to show his children what their father’s true passion is like. Although he seldom works with his grandfather, legendary racer, “Tiger” Tom Pistone, he wants to bring the once synonymous name back into NASCAR, and for a long time.

“I have had a lot of support to get our name back into racing. There are people that like it and people that hate it. At this time, I hope that I can bring it back in a positive way. I think so far, we are doing a good job – kind of flying under the radar and not causing any issues, just getting valuable seat time and learning.”

Joseph Wolkin (@JosephNASCAR) is a sophomore at the Queensborough Community College as an English major. He’s a native of Whitestone, NY, just outside of New York City, and has been attempting to find roots of motorsports within his area since 2004. He started out as just a fan, but over the course of his high school career, he ended up falling in love with writing.

Joseph has been covering NASCAR since 2011 for several different websites. Recently, he was named as one of two lead NASCAR columnists for Rant Sports after working for the site for over one year. Working with Rant Sports for approximately 14 months, Joseph has covered New York City area sports teams such as the New York Giants, New York Mets, New York Rangers, New York Islanders and more.

Through his passion is for NASCAR, Joseph has adapted to changing times and realizes that he has numerous opportunities in the journalism work. As one of the top young sports writers, his goal is to become one of the top motorsports writers of this new digital media era. However, he also believes that it’s important to stick to the traditional routers of print publications after seeing his high school newspaper dissolve due to a lack of funding.

Currently, besides his duties with Speedway Digest, Joseph is a columnist with Fronstretch.com, Motorsport.com and has a weekly article in NASCAR Pole Position's digital version - ROAR! Weekly Race Preview Magazine.