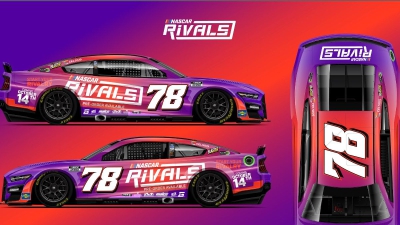 “I am super excited about the opportunity to race the Motorsport Games NASCAR Rivals car again at Talladega Superspeedway,” said driver and co-owner, B.J. McLeod. “We debuted the NASCAR Rivals scheme at Daytona International Speedway this August and brought home my NASCAR career best finish, P7. Jessica, Matt and I also spent the Daytona rain delays racing each other on NASCAR Rivals Nintendo Switch™. This new game is a ton of fun and we are excited for it to be released to the public on Oct. 14.”

NASCAR Rivals, the officially licensed video game of the 2022 season, puts the fun and intensity of the NASCAR Cup Series in the palm of your hands on the Nintendo Switch™. Featuring the 2022 official teams, drivers, cars, and regular season and playoff schedule from the world’s most popular stock car racing series.  Pre-orders are live now. NASCAR Rivals will be available for $49.99 at most major retailers and on the Nintendo eShop on October 14, 2022.

Unique to NASCAR Rivals is the fact players can take the game wherever they go. No internet connection is required to play, meaning it can be played on the go, at the racetrack, in the grandstands, in the campgrounds, on the airplanes, anywhere you can think to race.

Motorsport Games and Live Fast Motorsports are eager to celebrate the return of the NASCAR Rivals scheme at Talladega Superspeedway as the game’s release date, October 14, approaches. Cheer on B.J. McLeod in the Motorsport Games NASCAR Rivals No. 78 Ford Mustang for the Cup Series race on Sunday, Oct. 2, 2022, at 2 PM ET on NBC. Purchase tickets to the race at https://www.talladegasuperspeedway.com/race-day-tickets/.