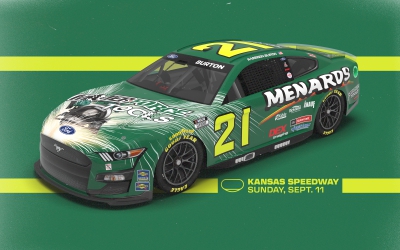 Harrison Burton and the No. 21 Menards/Masterforce team are headed to Kansas Speedway hoping to build on a steady performance when the Cup Series visited the Kansas track back in May. In that race, Burton qualified 26th but moved into the top 15 midway through the second Stage and ran there for much of the remainder of the race before dropping to 21st at the checkered flag.

Crew chief Brian Wilson said that gives him a dose of optimism headed into this weekend’s 22nd running of the Hollywood Casino 400 on the 1.5-mile track.

“Any return trip to a track is welcomed when you’re a team that’s building a notebook,” Wilson said. “Kansas is especially welcomed by everyone on the Menard’s Ford since we raced in the top 15 for most of the first race there.

“During that race weekend there were multiple tire failures for other teams. This weekend Goodyear has brought a new tire combination. With the added durability there’s also a stagger change.

“This change is the biggest source of conversation and concern as we study the notes from the first race.”

Wilson said he believes the Menards/Masterforce team can adapt to the changes.

“I’m confident that through our simulation work, previous notes on stagger changes as well as the simulator time provided by Ford that we’ll unload with all the necessary adjustments,” he said, adding that the team also will be focusing on Saturday’s qualifying session. “We know that a great starting position also comes with a great pit stall.

“All of that would give our pit crew a huge advantage. Our guys have been doing a tremendous job lately, and we want to help them capitalize on that.”