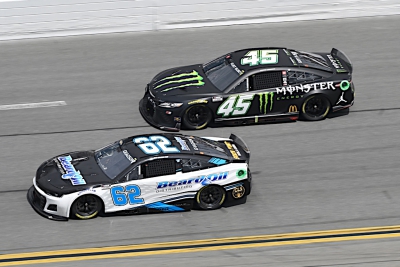 ●  The Las Vegas native opted to hang at the back of the pack to avoid being collected in one of the inevitable multicar accidents that typically happen at Daytona, running just outside the top-30 in his No. 62 Beard Oil Distributing Chevrolet Camaro.

●  Gragson successfully avoided a six-car accident on lap 32 and ran among the top-15 before pitting for four tires and fuel. He restarted 32nd with one lap to go in the stage and dropped one position before its conclusion.

●  The 24-year-old driver again opted to race outside of the top-30 during the initial laps of the stage.

●  Gragson joined his fellow Chevrolet drivers during a round of green-flag stops on lap 78. The team topped off his No. 62 Beard Oil Distributing Chevrolet Camaro and he returned to field in 28th, a position he maintained through the end of the stage.

●  Prior to the break, Gragson reported that he was bottoming out on the racetrack.

●  With the threat of rain, the team opted to pit twice during the break – once for four tires, fuel and chassis adjustments and another to top off his tank with fuel before the start of the final stage.

●  Gragson wasted no time working his way up through the field, running 18th by the time the caution flag waved on lap 103 for an eight-car incident. During the caution, he pitted for fuel and right-side tires.

●  Gragson worked his way up to 17th by the next caution on lap 126 for a six-car incident. He pitted for tires and fuel.

●  The Beard Oil Distributing driver found himself in a hornet’s nest of racecars as the field frantically jockeyed for position with rain imminent. He was running 21st on lap 139 when a sudden cloudburst dumped rain in turn one and resulted to a 13-car incident. Gragson successfully avoided the melee and, after a three-hour and 19-minute delay, he restarted in the top-10 for the final sprint to the finish.

●  Gragson picked up five positions over the final 18 green-flag laps to finish an impressive fifth.

●  This was Beard Motorsports’ best finish in the NASCAR Cup Series. It came in its 20th Cup Series start and its 10th at Daytona. Its previous best result also came at Daytona – a pair of seventh-place finishes in the 2017 Coke Zero 400 and the 2020 Daytona 500, both with former driver Brendan Gaughan.

●  Austin Dillon won the Coke Zero Sugar 400 to score his fourth career NASCAR Cup Series victory, his first of the season and his second at Daytona. His margin over second-place Tyler Reddick was .128 of a second.

●  Dillon was the 16th different winner in the 26 NASCAR Cup Series races run this season.

●  There were seven caution periods for a total of 30 laps.

“It was a strong run for this Beard Oil Distributing team. To come home with a top-five, that’s big for us. We were in a good spot running third there when the 2 (Austin Cindric) was out front and the 3 (Austin Dillon) was running second. It seemed like the 2 got loose and started down the racetrack and it was a hell of a save by Cindric, but that killed all our momentum. We were in a four-car breakaway – I thought I was going to set myself up to be in a pretty good spot and it just didn’t transpire. We had to regroup and come back for a fifth-place finish and we’ll take it.

“Congrats to everybody at Richard Childress Racing and the ECR motor department. They help us out tremendously on this Beard Motorsports team and, with one employee, this is a pretty big deal to go up against these organizations with 500 to 600 employees. So for the goals that we have, the budget that we’re on, and the race team that we are, it’s pretty rewarding to be kicking yourself over a fifth-place finish in the Cup Series. Very grateful for the opportunity and appreciate all the fan support and for NASCAR for letting us go to the end. I just want to say congratulations to Austin Dillon and his team. It was a lot of fun.”

The next event on the NASCAR Cup Series schedule is the Cook Out Southern 500 on Sunday, Sept. 4, at Darlington (S.C.) Raceway. The first race in the 10-race NASCAR playoffs starts at 6 p.m. EDT with live coverage provided by USA and SiriusXM NASCAR Radio.

Gragson and Beard Motorsports’ next race is the YellaWood 500 on Sunday, Oct. 2, at Talladega (Ala.) Superspeedway. That race starts at 2 p.m. EDT with live coverage on NBC and SiriusXM NASCAR Radio.