Buescher Caught Up in Rain-Affected Incident in Daytona 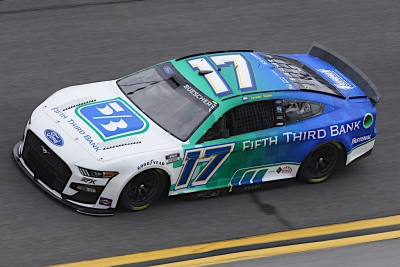 Chaos would be an understatement to describe the final few laps of Chris Buescher’s afternoon at Daytona International Speedway, as he was in the mix of running for the lead – one of numerous drivers needing a win for a playoff berth – but was ultimately caught up in a multi-car incident that transpired after rain fell in turn one.

Inclement weather was the story of the weekend, which ironically was partly the reason for Buescher and multiple others’ afternoons coming to an early halt. Buescher didn’t see his day end without a valiant effort, though. He finished 13th in stage one and was well inside the top five for a good portion of the green-flag action.

After qualifying on Friday was cancelled due to storms, the rule book set the lineup with Buescher slotted eighth in the Fifth Third Bank Ford. Saturday night saw storms dominate the sky, with ultimately enough rain to postpone the regular-season finale to Sunday at an unprecedented time of 10 a.m. ET.

The timing worked out well enough as the field saw the track for the first time all weekend Sunday morning. Buescher initially maintained inside the top-10 for the opening laps and was able to avoid the first incident at lap 30 that ultimately sent his teammate Brad Keselowski to the garage.

With a one-lap shootout to the completion of stage one, Buescher crossed the line 13th. He was back in the top five with 100 to go, but finished 29th in stage two. Then, just after the stage three green flag, another multi-car crash occurred, but Buescher avoided heavy damage and only required fresh tires and some cosmetic work.

He avoided another incident at lap 125 running 12th, and from there had solid position as he restarted eighth with 30 to go. The caution immediately came out after that restart when he was scored seventh, at which point storms were imminent at the track. The field restarted with 26 to go with Buescher in fourth, as all patience was out the window with rain seconds from falling.

Buescher made the moves he needed and was within striking distance, but when rain fell in turns one and two with 21 to go, the field went sliding in every direction, with the No. 17 unfortunately turning right into the outside wall, ending his day.

The focus now shifts to the final 10 races of the season with Darlington Raceway up next on the schedule. Race coverage next Sunday night is set for 6 p.m. ET on USA, MRN and SiriusXM NASCAR Radio.