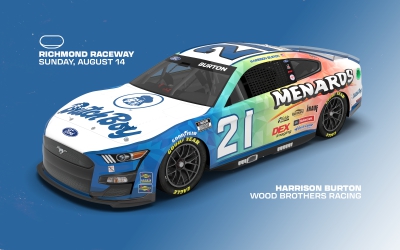 After a disappointing outing at Michigan International Speedway, Harrison Burton and the No. 21 Menards/Dutch Boy team are hoping to rebound this weekend in the Federated Auto Parts 400 at Richmond Raceway.

Back in April at Richmond, Burton qualified 17th and finished 18th in his first Cup start on the three-quarter-mile oval, but he and the No. 21 team saw lots of potential there.

“I feel like Richmond was one of our better races earlier in the year when we compare to our alliance partners with Team Penske,” Burton said on a call with reporters Tuesday afternoon.

“The goal is to run as good as those guys do, so that was a race where I felt like we did that.

“We had a decent run there and had some speed and showed a lot of speed in the race, but we just didn’t execute properly on a few things and that bit us.”

Burton said the key to a good finish at Richmond, like other tracks on the circuit, is for the team to have a strong performance from the first lap of practice to the checkered flag on Sunday.

“We have to show up and qualify well, practice well,” he said. “I really want to be in that top 10 in qualifying at Richmond.

“I really love that race track and feel like that place suits me well, so I want to be a top-10 guy there in qualifying and build off of that for the race.”

Burton said that no matter where he and the team are racing for the remainder of the season, the goals are basically the same.

“We just need to get better and better every week and show progress at the end of the day,” he said. “That’s the biggest goal for us.

“We’re working day and night. There’s no pointing fingers on our team, which is amazing.  All of our team members at Wood Brothers Racing are all kind of pointing fingers at themselves at what we can all do better.

“I’m in that same boat and working as hard as ever to do this. It’s an honor to drive the 21 car and get it out front. It’s a priority for us and at the end of the day we’ve got to put the work in to do that.”

Practice at Richmond is set for 5:05 p.m. Saturday to be followed by qualifying at 5:50.

Stage breaks are scheduled for Laps 70 and 230.