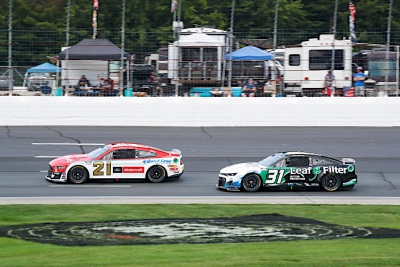 Harrison Burton and the No. 21 Motorcraft/Quick Lane started 31st and finished 26th in Sunday’s Ambetter 301 at New Hampshire Motor Speedway, but those numbers don’t tell the whole story of the team’s efforts on the Magic Mile.

Burton took off at the drop of the green flag and had just cleared a group of drivers when a multi-car crash occurred in his rear-view mirror on Lap 6.

He continued on and ran around 25th place for the remainder of the first 70-lap Stage. He ended that segment in 24th place, one lap down but in the free pass position, which allowed him to rejoin the lead lap for the start of Stage Two.

In the second Stage, Burton continued to run at the back of the lead lap and escaped serious damage on Lap 92 when he was spun into the outside wall due to contact from Corey LaJoie, whose car suffered a mechanical failure.

When Ryan Blaney spun to bring out another caution at Lap 145, Motorcraft/Quick Lane crew chief Brian Wilson elected to bring the No. 21 Mustang to pit road early for a major adjustment.

Returning to the track with a better-driving Mustang, Burton drove up to 19th place at the end of the second Stage.

At that point, Wilson made a strategy play to gain track position and left Burton on the track as others made pit stops.

The No. 21 cycled into the lead, and led laps 189-191. It marked the third-straight race that Burton has led at some point.

Burton fell back a bit but hung onto a top-10 spot until the caution flag flew with 97 laps remaining for a spin by Todd Gilliland.

On the ensuing pit stop, a tire from the No. 21 Mustang rolled into an adjacent pit stall, drawing a penalty for interference. That put Burton at the tail of the field for the restart.
He ended the race in 26th place, one lap behind the leaders.

Burton and the Wood Brothers team now head to Pocono Raceway for a 400-miler on July 24.