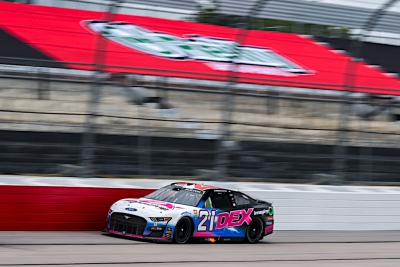 On Sunday afternoon at Darlington Raceway, rookie Harrison Burton and the No. 21 DEX Imaging team were able to make significant mid-race gains at one of the toughest tracks in motorsports.

After starting 25th, Burton and the No. 21 Mustang were mired in 30th place at the end of the first 90-lap Stage of Sunday’s Goodyear 400 at the “Track Too Tough To Tame.” But when the checkered flag fell, they had rallied to finish a season-best 14th.

Burton didn’t gain much ground until the second Stage got underway. By Lap 185, the end of that segment, he had moved up to 20th place and was showing more speed as the race progressed.

He was running solidly inside the top 20 when a multi-car crash on a restart with 33 laps remaining scrambled the line-up.

Burton steered clear of trouble as the incident unfolded ahead of him, but flat-spotted his tires in the process, resulting in a trip to pit road for fresh rubber.

He rejoined the race in 12th place and wound up 14th at the finish, giving him the honors for being the highest finishing rookie.

Crew chief Brian Wilson described Sunday’s work by the DEX Imaging crew as “an outstanding result for the team.”

He said he, the crew and Burton are figuring out which adjustments to the No. 21 Mustang are best suited for Burton’s driving style.

“We are continuing to build the team and making progress on giving Harrison the feel he’s looking for,” Wilson said, adding that a successful performance at Darlington comes at a good time for the team. “It’s something we can build on heading into a stretch of similar, intermediate tracks at Kansas, Texas and Charlotte.

And, Wilson said, a top-15 finish also gives the team a bump up in the points standings, from 31st to 29th.

Burton and the DEX Imaging team now head to Kansas Speedway for the AdventHealth 400 on May 15.