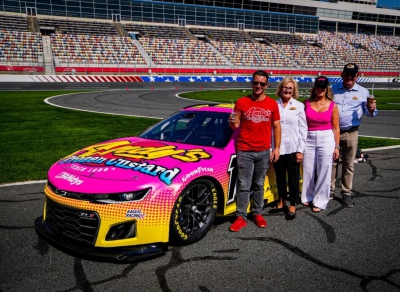 Kaulig Racing and Andy’s Frozen Custard® have announced a renewed partnership for the 2022 NASCAR Cup Series (NCS) and NASCAR Xfinity Series (NXS) season, beginning with the NASCAR All-Star race at Texas Motor Speedway on May 22 at 8 p.m. ET.

To kick off their 2022 partnership, AJ Allmendinger’s No. 16 Camaro ZL1 for the All-Star race will have a colorful paint scheme featuring the Andy’s™ logo. As an added bonus for race fans everywhere, a new, limited-time All-Star Jackhammer™ will be offered at all Andy’s locations, beginning May 3rd.  Already a winner, the All-Star Jackhammer features creamy chocolate frozen custard blended with Oreo® and peanut butter, then drilled and filled with marshmallow crème.

“It means so much to our family, as lifelong motorsports fans, to be supporting NASCAR via our partnership with AJ and Kaulig Racing,” Andy Kuntz, CEO and Owner of Andy’s Frozen Custard, said. “Andy’s brand hallmarks -- quality, constant innovation, a commitment to family and community and speedy service --  align well with a motorsports partnership.”

In addition to the All-Star race, Andy’s will also act as the primary partner on Kaulig Racing’s No. 16 Chevrolet and race entitlement sponsor at the Andy’s Frozen Custard 300 at Texas Motor Speedway on September 24 for the NXS race. Andy’s will also bring back the AJ AlmondDinger treat for a limited time.

“I’m excited to have Andy’s Frozen Custard back with us for a second-straight year,” said Allmendinger. “Having them onboard our No. 16 Chevrolet last year, as well as having a flavor of custard named after me, was awesome. Now being able to do it again this year for the All-Star race makes this relationship even more special.”

Last year in only its first, limited schedule NCS season, Kaulig Racing won the Verizon 250 at The Brickyard at Indianapolis Motor Speedway with Allmendinger, making them eligible to compete in this year’s All-Star race.

“We’re pumped to be able to compete in the NASCAR All-Star race in just our first, full season in the Cup Series,” said Kaulig Racing team owner, Matt Kaulig. “Winning a Cup race as a young team and being eligible for the All-Star race is truly and honor and having Andy’s team up with us for this race makes it even more special.”

Kaulig Racing and Andy’s partnership will kick off at the NASCAR All-Star Race at Texas Motor Speedway on May 22 and conclude at the Andy’s Frozen Custard 300 on September 24.