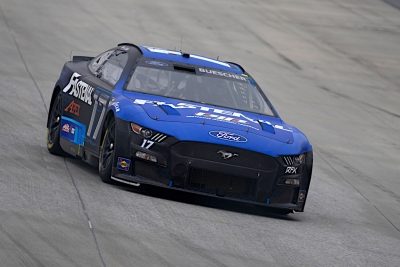 Chris Buescher led the field to green Sunday at Dover Motor Speedway, earned stage points in each of the first two stages and brought home the Fastenal Ford eighth in a Monday finish at the Monster Mile.

“It was a good run for the Fastenal Mustang,” Buescher said. “Everyone on the team worked really hard and did a nice job and it is a momentum builder. It isn’t all that we wanted but the pole was awesome, that was really cool. I know we had speed in it in clean air, we just fought dirty air, and unnfortunately, that is a really big deal here. We could move around for a little bit and the tires would fall off, which is great, but once we got to the point where we had to kind of stay in line we were just sucking up dirty air which made it hard.”

Just 69 laps into the action on Sunday, rain moved into the area and unfortunately did not move through in enough time to resume at the Monster Mile, a track that does not have lights. Coming off his first-career pole, Buescher led the first 18 laps on Sunday, one of 10 drivers overall to lead laps.

Once the action got back underway Monday, Buescher moved from just outside the top-10 at the resumption to back into stage point territory, where he ended the opening segment of 120 laps in eighth.

Track position would flip midway through the second stage as a host of cars stayed out on track, but Buescher and the No. 17 team fought back to end the stage in ninth. With a total of 13 cautions displayed throughout the 400-mile marathon, six came past the halfway point, four of which were inside stage three.

Despite the late-race chaos, Buescher held his own in the closing laps to bring home the top-10 for his best-career finish at the Monster Mile.

“We want more,” Buescher added. “I am not content there but it is a strong run for us and I am excited to head into Darlington.”

The race at Darlington is set for next Sunday at 3:30 p.m. ET. Coverage is set for FS1 and can also be heard on MRN and SiriusXM Channel 90.